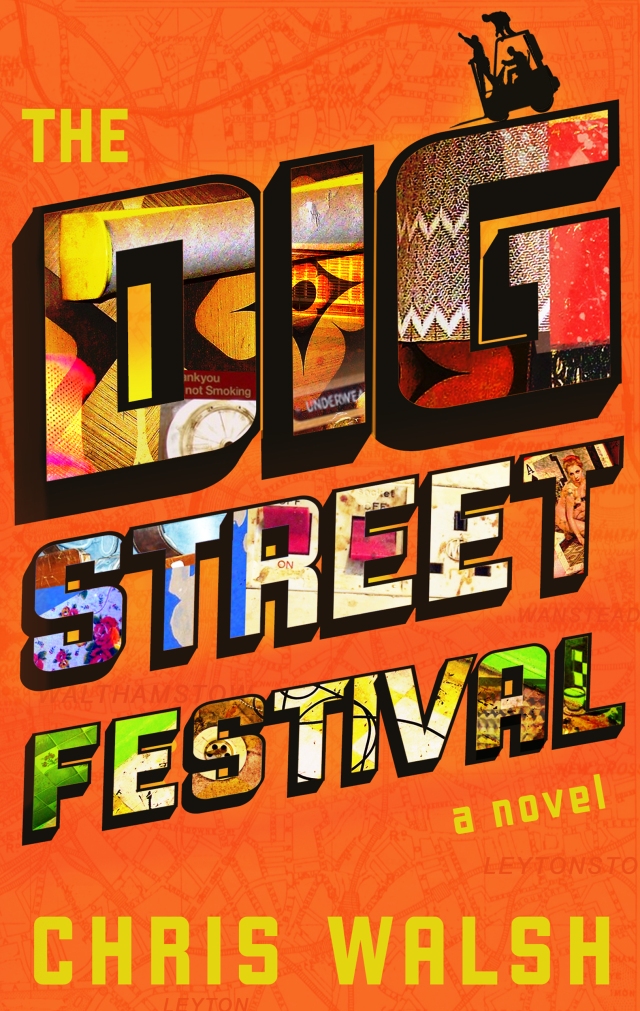 It’s 2006 in the fictional East London borough of Leytonstow. The UK’s pub smoking ban is about to happen, and thirty-eight-and-a-half year old John Torrington, a mopper and trolley collector at his local DIY store, is secretly in love with the stylish, beautiful, and middle-class barmaid Lois. John and his hapless, strange, and down-on-their-luck friends, Gabby Longfeather and Glyn Hopkins, live in Clements Markham House – a semi-derelict Edwardian villa divided into unsanitary bedsits, and (mis)managed by the shrewd, Dickensian business man, Mr Kapoor.

When Mr Kapoor, in a bizarre and criminal fluke, makes him fabulously credit-worthy, John surprises his friends and colleagues alike by announcing he will organise an amazing ‘urban love revolution’, aka the Dig Street Festival. But when he discovers dark secrets at the DIY store, and Mr Kapoor’s ruthless gentrification scheme for Clements Markham House, John’s plans take several unexpected and worrisome turns…

Funny, original, philosophical, and unexpectedly moving, The Dig Street Festival takes a long, hard, satirical look at modern British life, and asks of us all, how can we be better people?

It is my turn on the blog tour today for The Dig Street Festival, the debut novel by Chris Walsh. My thanks to Emma Welton of damp pebbles blog tours for giving me a place on the tour and to the publisher for my digital copy of the book, which I have reviewed honestly and impartially.

Let’s get this out in the open right from the off. This book is bonkers. Totally off the wall, a crazy ride, bizarre characters and a series of increasingly unlikely and out of control events might make you think this book is not the one for you. Do not be fooled. In the midst of all the mayhem and madness, at the very heart of this book, is a core of charm and delight that runs through it like words through a stick of Blackpool Rock and it makes this book one of the warmest, funniest and sweetest reads I have picked up this year so far.

At the centre of the book is John Torrington, a man who has found himself on the fringes of life, largely ignored by almost everyone and scratching away an existence on the margins of society. By day he collects trolleys and mops floors at his local DIY superstore, at night he lives in a rundown building full of sad bedsits, inhabited by other lonely, forgotten men, mooning after the bright, young barmaid in his local pub, reading secondhand stories about Scott of the Antarctic and scratching away at his poetry (mainly haikus) and his unfinished novel. A less prepossessing character to carry a book it would be hard to imagine, but John has hidden depths, or so he likes to believe. Almost everyone, except his equally strange friends, Gabby and Glyn, disagree.

I absolutely adored every single character in this book. This author had created some of the most memorable people you will every meet in a novel, and then placed them in equally memorable situations and watched what they do. (I say watched, because it is very clear to me from reading this that each of the people in this book have very individual minds of their own and have done their own, quite bizarre things on the page which I am sure the author had little if any control over in the end.) There are some really memorable scenes in the novel – the one involving the journey to the DIY store on Gabby’s first day at work is a particular standout (parts of which made my slightly gyp to be honest) – and many real laugh-out-loud moments. You can’t imagine a group of people who get into so many mad scrapes as this trio, but in the context of this novel you can completely believe they are happening, and it is quite a ride to take with them.

At the same time, there is so much tenderness within this book. The relationship between the three men is oddly touching. They all look out for each other and clearly care for one another in a way that most of us would be lucky to find in this life. This care extends from their small trio to the other hopeless residents of Clements Markham House, despite the fact they are largely unpleasant, ungrateful and undeserving. John Torrington has a big, soft heart, and lavishes his care around, even to his bullying, sadistic boss, OCD-impaired supervisor and any other waif and stray he comes across in life. But his own vulnerability is really thrown into sharp relief in his relationship with Lois, much younger than him and way out of his league both in terms of social status and intellect. Despite this fact, we long for her to see the qualities he has lurking beneath us outwardly awkward facade and give him a chance.

This book is a really different read, but all the more appealing for that. My favourite thing about blogging is coming across these hidden gems of books that are outside the mainstream and outside your reading comfort zone. It is within these novels that we find something new and exciting, that speaks to us of things we may never have considered before and takes us places we have never been. Loved it, loved it, loved it. Funny and moving.

The Dig Street Festival is out now in all formats and you can buy a copy here.

Make sure you check out the rest of the tour:

Chris Walsh grew up in Middlesbrough and now lives in Kent. He writes both fiction and non-fiction, an example of which you can read here in May 2020’s Moxy Magazine.

​Chris’s debut novel The Dig Street Festival will be published by Louise Walters Books in April 2021.

​Chris’s favourite novel is Stoner by John Williams and his favourite novella is The Death of Ivan Illyich by Leo Tolstoy. His top poet is Philip Larkin. He is also a fan of Spike Milligan.

One thought on “Blog Tour: The Dig Street Festival by Chris Walsh #BookReview”