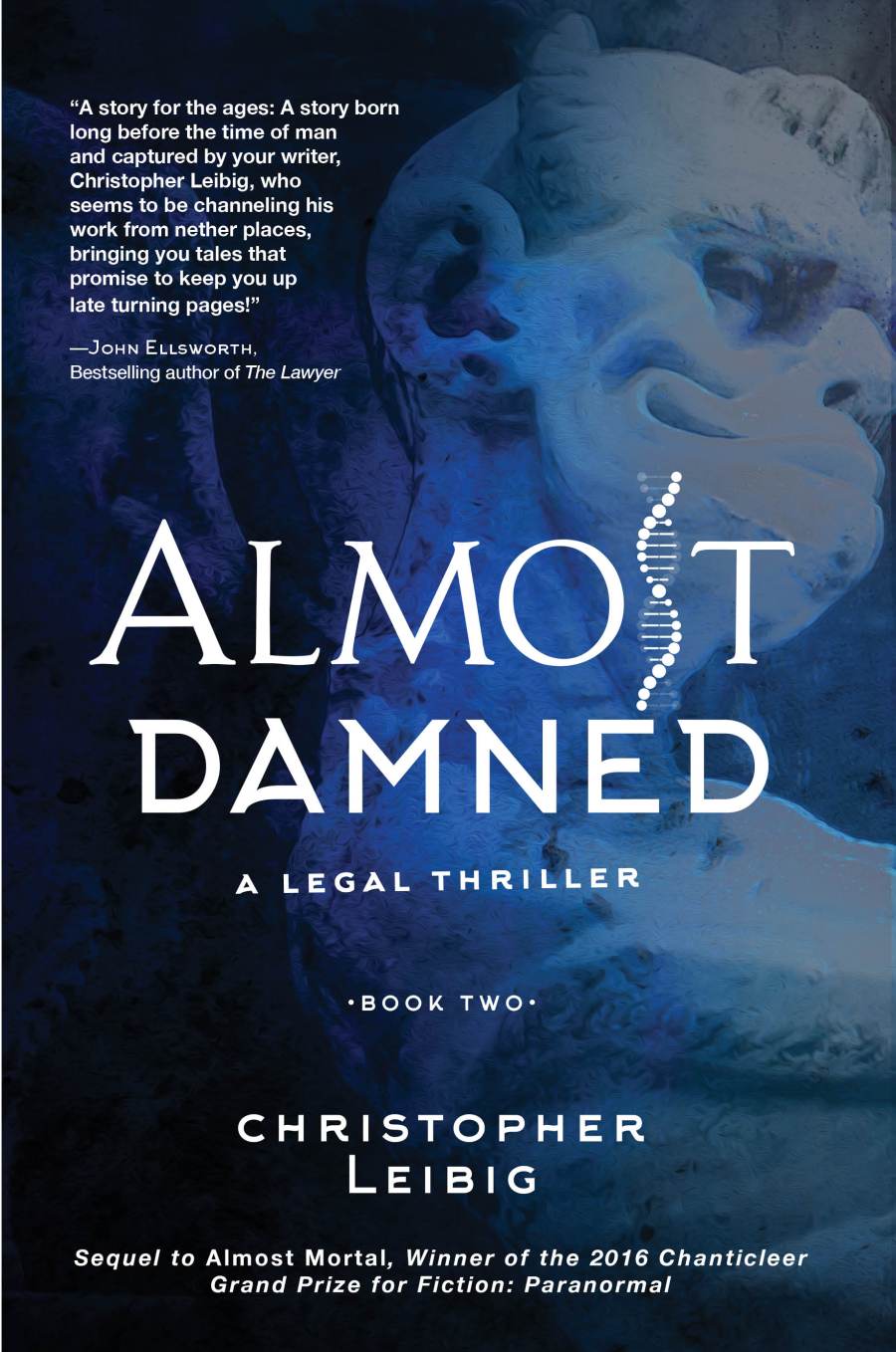 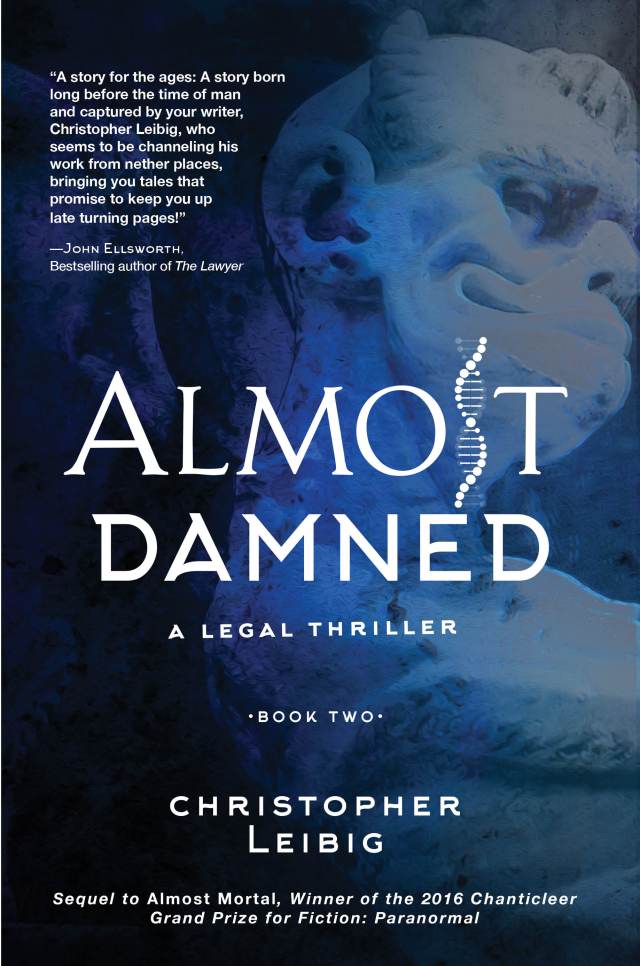 Defense attorney Samson Young has an uncanny ability to get even the so-called worst clients off the hook, as he ably demonstrated in Almost Mortal. In Almost Damned, little does Sam know that his most challenging cases are all leading up to one monumental trial, in which he will lay before the Court the visceral complexities of good vs. evil.

As Sam navigates his cases in Bennet County, it becomes increasingly apparent that his clients-old and new-are surprisingly interconnected, especially when old clients rise from the dead. Literally. He and his office are besieged by death threats and mysterious invitations, each one a clue that compels him to dig deeper into his own past. With each new discovery, Sam leads himself and his team deeper into a nether world in an attempt to bring redemption to his toughest clients of all-the descendants of the biblical Fallen Angels who have been walking the earth as humans for centuries, unable to find peace.

Almost Damned is the second book by Christopher Leibig featuring defense attorney Samson Young, following on from Almost Mortal. I am grateful to publicist Sabrina Dax for inviting me to review the book and to the author and publisher for providing me with copies of both books for this purpose. I have reviewed the book honestly and impartially.

Regular readers of the blog will know that legal thrillers are one of my favourite genres and I consider myself to be a bit of a connoisseur, having read pretty much every author of note over the years. However, I have never read one like this before. Christopher Leibig has combined the legal thriller genre with a paranormal twist to come up with something quite unique and intriguing.

Although Almost Damned can be read as a standalone, I would recommend reading Almost Mortal first, as it sets up events for the second book and will give you a great understanding of Samson and his past and why he finds himself in the position as lawyer for the Fallen Angels. It will also ease you in to Christopher’s style of writing, which is elaborate, complex and detailed and requires a certain level of concentration.

When you pick up the books, they seem quite thin, but they pack a huge punch. The world the author has built is rich and elaborate, mixing historical flashbacks and esoteric ideas with the very modern and immediate world of law. It is a juxtaposition that could be an uncomfortable jumble, but the author sorts through it with confidence and panache. However, it does require attention from the reader to keep up, this is not a quick easy read.

I thought the author’s portrayal of the legal world was very accurate, showing the hurly burly and every day jumble that legal defence practice is. Some books have lawyers focusing on one case at a time, with leisure to pursue every lead to their hearts content. This isn’t the reality. In reality, lawyers juggle dozens of cases all at once, jumping from one to the next in the blink of an eye and having to have recall of all the facts at their fingertips. This really comes across in the writing here, and I thoroughly enjoyed this aspect of the book.

When it comes to the other aspect of the novel, the trial of the Fallen Angels in front of a jury of Archangels, here we are reaching the heights of philosophy and religious dogma, and it isn’t going to be for everyone. Some of the ideas explored here are an intellectual reach, and had me pondering what he was saying for a long while after I had finished the book. It is a bold and brave idea to explore, and he carries it off very well, but I did wonder how he came up with it. It would not be a genre blend I would ever have contemplated attempting but it does make for a very fascinating and individual read.

I don’t think these books will be for everyone, they are a densely-packed mix of ambitious and elaborate ideas with frenetic activity, lavish language and numerous characters, all with more than one name. They require attention while reading, not an idle way to pass a lazy afternoon, but reward the reader with a new and beguiling world to explore. I would recommend them to someone who is always on the hunt for that outlier novel that pushes the boundaries of what has been done before.

Almost Damned will be released in ebook and paperback formats on 1 April and you can pre-order it here. The first book in the series, Almost Mortal, is out now and you can get it here. 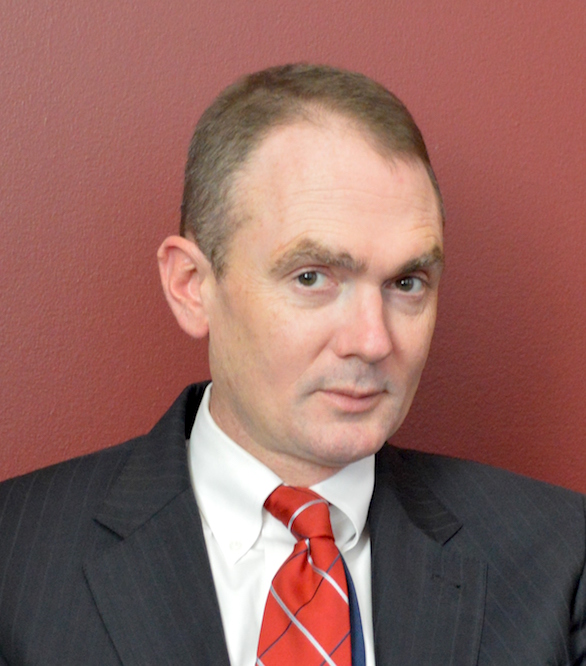 Chris’s law firm, the Law Office of Christopher Leibig, represents individuals charged with or being investigated for serious criminal offenses throughout Virginia and in Washington. DC. His firm has received numerous awards and recognitions, including inclusion in Washingtonian Magazine’s Top Lawyers in Criminal Defense every year since 2011. Chris has also published numerous articles on criminal defense and related politics – including in the Huffington Post and The Examiner – and appeared as a legal expert regularly since 2009 in print and television media – including Fox News, CNN, The Washington Post, The New York Times, and Sports Illustrated. In recent years Chris has regularly handled high profile criminal cases in the DC area and travelled abroad to speak to law schools. Since 2012, Chris and his colleagues have lectured on criminal defense throughout Virginia, and in Scotland, Ireland, Trinidad, The Bahamas, Jamaica, and Denmark.