Ambition can be deadly

Broadcast to millions from its picturesque location off the coast of Jersey, Falcon Bay was once the world’s most popular soap opera. But with ratings at an all-time low, a new network owner, the malevolent Madeline Kane, arrives on the private island determined to do whatever it takes to get the show back to the number 1 slot.

Director Farrah, leading lady Catherine and producer Amanda are the driven, ambitious women who’ve been trying to hold the production together. But thanks to their handsome but corrupt boss, Jake Monroe, Farrah is losing episodes to male colleagues, seventy-year-old Catherine is terrified of losing the public’s adoration, and Amanda is battling her desire for a forbidden affair with a handsome new employee.

As Madeline’s pressure to revive the show intensifies, she unleashes a true battle of the sexes where the women will do anything to stay in the jobs they love and on the island they call home. Can they team up to bring down their rivals? Or will jealousy, betrayal and revenge rip their friendships apart? As the story reaches its shocking climax, one thing is for certain: only the most ruthless woman will survive…

I’m thrilled to be taking my turn on the blog tour today for the fabulous new thriller by Melanie Blake, Ruthless Women. My thanks to Bei Guo at Midas PR for asking me to take part and to the publisher, Head of Zeus, for my advance copy, which I have reviewed honestly and impartially.

It’s been quite a while since I was glued to the pages of a book in quite the way I was to Ruthless Women. In fact, I can go back to the 1980s, when I was a teenager and my friends and I were passing around copies of Judith Krantz, Jackie Collins and Shirley Conran novels in the Sixth Form common room with the page corners turned down at the really juicy bits. (Do you remember THAT scene in Lace? We were agog!) Those books, filled with strong, glamorous and bitchy women, ruthless men and settings that were well beyond the experience of a Yorkshire teenager whose parents hated to fly, were a window onto an exciting and unbelievable world and, in Ruthless Women, Melanie Blake has taken the ‘bonkbuster’ and brought it right up to date.

The book is set in the world of a long-running TV soap opera. Falcon Bay was once the most popular soap in the world, but ratings have been slipping and, when the network is bought out by an American production company, the new owners are determined to reverse the slide, whatever it takes. The main women involved in the show, the ageing star, ambitious young director, talent booker and demoted producer, are hoping that having a woman in charge might alter the misogynistic atmosphere on the soap that keeps them from achieving their goals, but it turns out that the new alpha female might not be the ally they were hoping for.

This book pulls no punches in the storyline and is unashamedly outrageous. Sex, drugs, rows, double-crossing, secrets, lies, adultery – it’s all here in glorious technicolour and keeps the plot high octane from start to finish. The plot is way, way, way over the top, just like all of the fantastic blockbuster novels used to be, and this is what makes it such magnificent, escapist fun. If you really want to be transported from this terribly tedious, mundane lockdown world, this is the book to do it. You can lose yourself in a total fantasy world, although maybe some of this stuff actually happens, as the author works in this world and knows what goes on, and experience things that will never happen in real life to a middle-aged mum from Yorkshire. I loved it for the exact same reasons as I loved those bonkbuster novels I devoured in my teens.

What is really great about this book though, is that the women are centre stage and the men are in the supporting roles. The women are there for each other, female empowerment and female friendship, as well as rivalry, are driving the plot, and they don’t need the men to succeed. Despite some of the cat fighting and other shenanigans that goes on between the characters, female relationships and the power of women working together are what drives the plot of this book, and I adored that about it. The best of these types of books were always about strong, empowered women and this is why women love reading them, as beautifully described in this recent article.

I raced through the pages of Ruthless Women as fast as I could go, barely pausing for breath. Yes, the plot is OTT, yes all the women are impossibly beautiful, yes the men are rats. This is not real life as most of us know it, but that is the entire point. This is wonderful, escapist fun. There are shocks, bigger shocks, unbelievable shocks and just the most outrageous shocks that you could never see coming. This book keeps giving you more and more things that will leave you open-mouthed and delighted. This is the glorious resurrection of the bonkbuster, and I revelled in every minute of it. I had a brief Twitter exchange with the author yesterday, when she told me how much she had enjoyed writing the book and this shows clearly in the writing. Almost as much as I enjoyed reading it. With glee, would be the phrase I used. I loved it, loved it, loved it. I’ve immediately ordered The Thunder Girls to get another fix. Read it now.

Ruthless Women is out in hardback, audiobook and ebook formats on 18 February, and in paperback on 8 July. You can buy a copy here.

Please do check out the other blogs taking part in the first part of the tour: 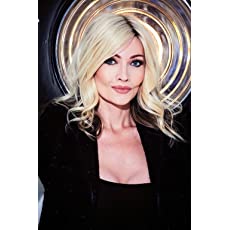 At fifteen years old Melanie Blake was told by her high school career advisors that her decision to do work experience at a local record shop was an ’embarrassment to the school and a clear example that she wouldn’t go far in life or her career’. They were wrong. By twenty-one she was working at the BBC’s iconic Top of the Pops show and by twenty-seven she had built a reputation as one of the UK’s leading music and entertainment managers, with her own agency and roster of award-winning artists who had sold more than 100 million records. During this time she also built up an acting agency from scratch which quickly became the most successful independent boutique agency in the UK where she manages clients from some of the biggest internationally syndicated shows in the world.

Her roster have won Baftas, Emmys and pretty much every best actress award going and Melanie is one of the most successful female agents in the world. In the UK alone – over 25 million people a week currently tune in to watch the very stars Melanie represents in their globally syndicated shows. In 2018 after two decades at the top of her game, Melanie decided to manage a smaller client list and concentrate on her other passion, writing – first as a columnist for a national newspaper, then as a playwright and now as a best-selling novelist.

Her first book The Thunder Girls became a Number 1 Best Seller in the summer of 2019 and the play she adapted from the novel broke box office records for a new work at the prestigious Lowry Theatre.

She still represents a high profile stable of some of the best known faces on British television but is also now enjoying success in her own right as a producer, author and playwright.

Ruthless Women is her second novel.