What if you were framed for a murder you didn’t commit?

Jennifer Smits is a young mother, married to a hotshot lawyer and living in Amsterdam. Her world explodes when her husband is found dead at a holiday park during a weekend getaway. Convinced that the police have failed in their investigation, she embarks on a desperate quest for the truth – but the deeper she digs, the more she gets enmeshed in a tangled web of lies, spun by a ruthless law firm.

As Jennifer’s search for answers intensifies, her grip on reality weakens. Barely able to manage her patients at the health clinic, or take care of her young son, Jennifer is at risk of losing it all – even her closest friends begin to desert her. And then a chance encounter with a charming stranger sparks a new chain of events that plunges her deeper into a world of threats and corruption. Soon, she begins to fear for her life – but who can she trust, and how far will she go in pursuit of the truth?

I am delighted to be sharing my review today of Double Deceit by Julienne Brouwers. My thanks to Chris Nijs at JB Publishing for inviting me to take part and to Head of Zeus for my digital copy of the book, which I have reviewed honestly and impartially.

I was immediately drawn to the premise of the book as soon as I read the blurb. I am a sucker for a legal thriller and the prospect of a lone woman up against a nefarious group of lawyers is definitely something I want to read. I was hearing echoes of one of my favourite books, The Firm by John Grisham, and there were definite parallels between that book and this one as I read it, so if that is a book that is up your street, I know you will enjoy Double Deceit.

The book starts off with tension between the main character, Jennifer, and her husband Oliver whilst they are on a family break when their young son gets lost. I thought the story was going one way when Oliver later turns up dead, but it soon took a different turn and we are lead down a labyrinthine path, as more and more details of Oliver’s life before his death are revealed to an unsuspecting Jennifer and her faith in what she knew about her husband is shaken to the core. She begins to doubt his death is as straight forward as the police believe, and she becomes obsessed with uncovering the truth, to the point where she is alienating all around her.

The book is gripping, with numerous red herrings and dead ends thrown in to keep the reader guessing right until the end. Just when you think you know where it is going, there is a huge twist thrown in and, I have to say, I kept changing my mind between different theories as to what had happened, right up until the final chapter, so it was very cleverly done in that respect. There were numerous different endings that the book could have had, some that maybe would have been even more interesting than how it finally turned out, but overall I was satisfied with the way the plot turned out.

The author has developed some very interesting characters in the book. I thought the way she explored the emotional fallout for Jennifer of her husband’s death and being left alone with a small child to bring up alone was fascinating and realistic. How quickly her friends abandoned her when they thought she was going a bit crazy over the way her husband dies was very upsetting and makes you wonder what your friends would do in that situation. It was an interesting exploration of the dynamics of relationships and the robustness of the human spirit, how much we should trust our gut about people and how well we know them.

If I had any tiny niggles, one was that some of Jennifer’s actions required a bit of a stretch of credulity to accept, but this is often the case in a book of this sort, it isn’t supposed to be real life. Also, some of the writing, particularly in the speech patterns, sounded quite formal and not one hundred per cent natural. However, I put this down to English being the author’s second language and I think it is quite forgivable in that context.

I really enjoyed Double Deceit and would definitely read more books by this author in the future, it kept me  clenched in its grip for a good few hours. Highly recommended.

Double Deceit is out now and you can buy a copy here.

Please do check out the blogs listed below for more reviews of the book: 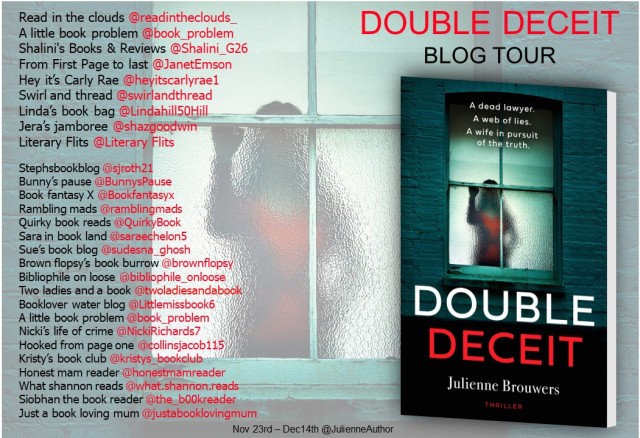 Julienne Brouwers worked as a pharmaceutical scientist and medical physicist before becoming a writer. She lives in the Netherlands, with her husband and three children, where she has published two successful thrillers, and lived in the UK and US for a total of four years.