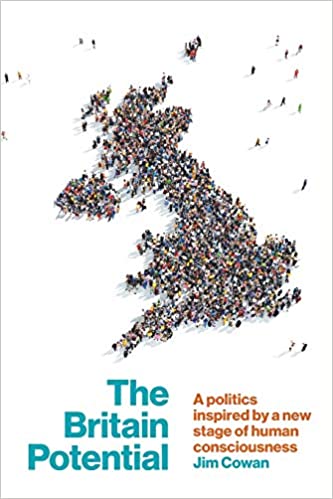 Reading this is going to change how you see Britain, especially its politics. The way we are used to hearing about Britain’s politics is through the filter of our media. This book, however, delves below the surface to the underlying realities and from there, a very different politics emerges. This is a politics which starts and ends with people realising their potential.

From Britain’s shifting political centre of gravity The Britain Potential pieces together a politics that is neither left nor right, is not of division and polarisation but is about integration, balance, and unity. It offers an entirely fresh, genuinely humanistic vision grounded in actual developments both historical and contemporary. This is a politics viewed as something at work in daily life which is not being reported in the media and that no political party has yet spelt out.

Told through stories, The Britain Potential helps readers take the pulse of the country and understand for themselves what ‘remedies’ will be effective. It offers ways forward, and hope, for people newly interested in politics, the politically homeless, people dissatisfied with life in Britain, leaders and activists of all kinds, public servants, business people, and people in communities. People around the world, who look to Britain, should find much of interest.

Britain has enormous potential, but is it realising it? For too many the answer is no. This is a book about what it takes to realise that potential, as individuals, families, communities, organisations and as a country. The Britain Potential is in our hands.

Today, I am pleased to be sharing my thoughts on The Britain Potential by Jim Cowan. I would like to thank the author for inviting me to review the book and for providing me with a paperback copy for that purpose. I have reviewed the book honestly and impartially.

Ever since the Brexit referendum in 2016, I have been feeling increasingly disenfranchised by the British political system. There is currently no viable political party on offer that seems to align with my ideals of the government that this country needs. What we currently have is clearly not working, the situation in this country is getting worse and worse. We are becoming more polarised as a society, people are angry, scared and isolated, they don’t feel served by society as it currently stands. And from what I see daily on social media, I know I am not alone in my frustration and disillusionment.

So, it was with interest that I picked up this book by Jim Cowan, which promised to give me a new vision of politics for Britain, one which sounded much more like the perfect vision I would have for how our country should work. Where we all feel more connected and involved in the running of the country, invested and active, rather than having things imposed upon us by a ruling class over which we, as individuals, feel we can have very little influence.

This book contains a lot of interesting ideas about a new way of moving forward in the UK, by passing more power and decision-making to the people at a local level, so that everyone can feel invested and engaged in making their own society better in a way that works for their particular circumstances. An ability of local organisations and authorities to tailor services to what is needed in their specific area, rather than a homogenised approach from central government that does not address specific regional needs, with the role of central government being to support and encourage these local initiatives. Where the focus is on listening and responding to the articulated needs of the end users of services, ie US, rather than on controlling and managing us and forcing us to mould ourselves into a centrally-mandated stereotype. This would allow people autonomy, and an ability to invest and believe in themselves, to live a truly individual and authentic life. For each one of us, and consequently the country as a whole, to realise our full potential.

I’m going to be honest, this is not an easy book to read. Despite being only around two hundred pages, it is dense with information, packed with some complicated jargon and utilising concepts that were totally alien to me and took some time to absorb and understand. Bits of it took me a couple of read throughs to totally grasp, it is not a relaxing book to take to bed with you at night (although I did.) However, once I got into it, I was totally absorbed and really fascinated by the ideas being mooted. I found the examples of places and organisations already operating along these lines truly inspiring and the picture that Jim paints of what Britain could be like, tempting and aspirational. If you are at all interested in politics and the way that our society could be improved for the benefit of everyone, it is truly an hopeful read.

I have to tell you, I came away from this book feeling quite emotional, which was entirely unexpected. I was left thinking ‘if only.’ If only this could be how we lived, everyone working to the best of their abilities for the betterment of society for everyone. I can see how this works at a micro level, both in Jim’s examples and when looking at my own small rural community, which is filled with village initiatives, community support and just individual acts of kindness and care. But can this be amplified to a national level? Looking around at how things currently operate at the macro level, it actually looks less and less likely. I see our society moving in the opposite direction, with a Government intent on taking more and more power to itself, rather relinquishing it, with our society become more selfish, small-minded and inward-looking, rather than exploring ways of working with others to the benefit of all. The over-riding national sentiment seems to be that helping and caring for others means losing something ourselves, rather than enhancing our lives. All movements for equality are met with resistance by people who see it as them having to give something up, rather than pulling everyone up to the same level. It makes me despair.

I loved the ideas in this book, but when Jim concludes that we are currently a long way from achieving this utopian version of our society, and the only way to get there is by a slow, incremental change rather than radical reform, I believe he is right. This vision is but a speck on the horizon, and I don’t currently see the path ahead from here to there.

The Britain Potential is available now and you can buy a copy here.

I have focused on political and social change in Britain for over 40 years.

This has been reflected in all areas of my life.

Community development, encompassing many different roles, has been at the heart of my work from the early 70s until 2012.

Between 1968 and 2005 I acquired five social science degrees, including a PhD.

I was also an honorary visiting research fellow for 10 years up until 2016.

In my personal life, I’ve practiced a socially engaged form of Buddhism for over 40 years which has enabled me to develop my consciousness more fully and realise more of my potential.

Since 2012 I have been meticulously researching what has been, and is, happening across Britain.

All these aspects, work, personal and social, academic study and research come together in this book.

It is four voices of doing, thinking, being, and researching that you will hear as you read The Britain Potential.

4 thoughts on “Book Review: The Britain Potential by Jim Cowan”