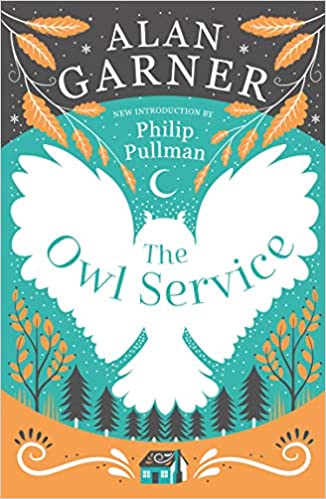 It all begins with the scratching in the ceiling. From the moment Alison discovers the dinner service in the attic, with its curious pattern of floral owls, a chain of events is set in progress that is to effect everybody’s lives.

Relentlessly, Alison, her step-brother Roger and Welsh boy Gwyn are drawn into the replay of a tragic Welsh legend – a modern drama played out against a background of ancient jealousies. As the tension mounts, it becomes apparent that only by accepting and facing the situation can it be resolved.

I read an article that a friend of mine had posted on Facebook recently about why people are turning to old, familiar, favourite books and TV series during lockdown, because they are comforting and known in a time of the new, strange and frightening. I, myself, have found this to be true, watching old episodes of Gilmore Girls and Midsomer Murders, and picking up copies of firm favourites from my bookshelf.

This may be initially why I was drawn to grab my copy of The Owl Service from my bookcase, but once I had read it again, I realised that this book no longer felt familiar to me at all and that coming back to this as an adult was a totally different reading experience, and not a comforting one at all. Somewhere between my last reading of this book, which must have been in my mid-teens, either I or the book had changed and become strangers who had to learn to relate to each other in a different way.

The book I remembered from my childhood was a slightly spooky story about a dinner service whose pattern came to life if you made the owls and odd things happened to the children who found it. When I read it now, I wondered why the book hadn’t terrified me as a child, and realised I had not really understood the story at all, because it is really about a trio of children being drawn against their will into an ancient magic that repeats itself by manifesting through a set of people down through the centuries.

This is marketed as a children’s book, but it isn’t really a book that can be properly understood by children. So much of what is going on in the story is inferred, rather than outwardly expressed, and would be much too complex and subtle for a child to understand. Alan Garner’s writing is very sparse, lacking description and embellishments, but this makes it all the more powerful in some ways, because there is so much room for the imagination to do its work, and we all know from childhood nightmares what our imaginations can conjure when given free rein. And, I think, that having lived and experienced so much, sometimes adult imaginations can produce some truly terrifying thoughts, especially in a time of heightened alarm such as we have at the moment.

This is a really powerful and evocative story, written in a bare writing style, which is a feat of magic in itself. But I don’t think I have had such a profoundly different reading experience from the one I expected as when I picked up this book after a gap of 34 years. Going back and rereading the same book does not always mean you get the same story.

The Owl Service is out now and you can buy a copy here.

Alan Garner was born in Congleton, Cheshire, in 1934. His began writing his first novel at the age of 22 and is renowned as one of Britain’s outstanding writers. He has won many prizes for his writing, and, in 2001 he was awarded the OBE for services to literature. He holds two honorary doctorates and is a Fellow of the Society of Antiquaries of London. In 2004 he co-founded The Blackden Trust http://www.theblackdentrust.org.uk