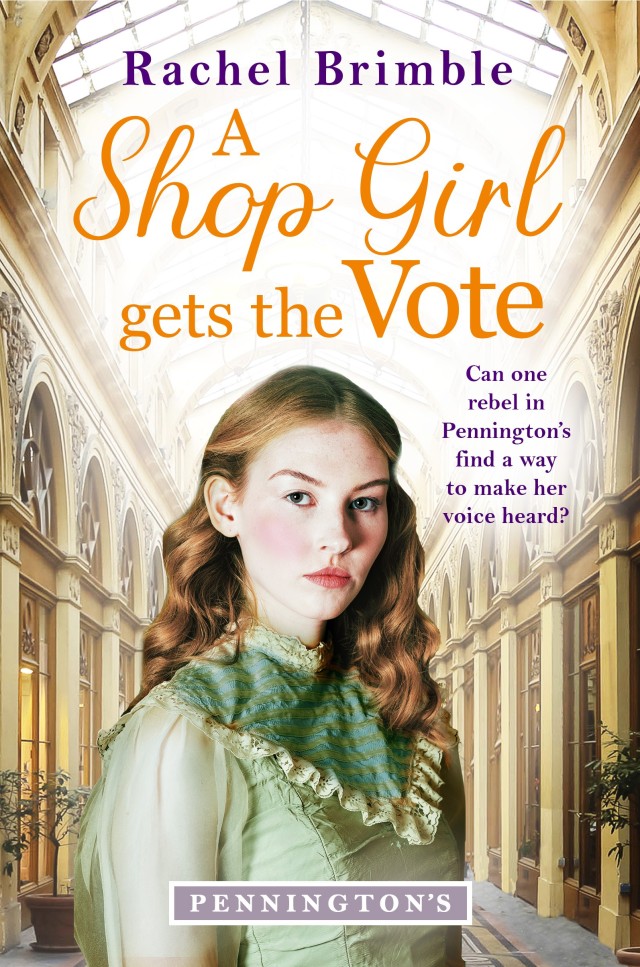 Banished from her ancestral home, passionate suffrage campaigner Esther Stanbury works as a window dresser in Pennington’s Department Store. She has hopes and dreams for women’s progression and will do anything to help secure the vote.

Owner of the prestigious Phoenix Hotel, Lawrence Culford has what most would view as a successful life. But Lawrence is harbouring shame, resentment and an anger that threatens his future happiness.

When Esther and Lawrence meet, their mutual understanding of life’s challenges unites them and they are drawn to the possibility of a love that neither thought existed.

With the Coronation of King-Emperor George V looming, the atmosphere in Bath is building to fever pitch, as is the suffragists’ determination to secure the vote. Will Esther’s rebellious nature lead her to ruin or can they overcome their pasts and look to build a future together?

Today, I am delighted to be joined on the blog by Rachel Brimble, who is going to talk about women’s progression in society, what suffrage was really about and what inspired her book, A Shop Girl Gets The Vote (previously published as, A Rebel at Pennington’s). So let me hand over now to Rachel.

Women’s Progression…good and not so good. What did the suffragettes & suffragists really want? by Rachel Brimble

I think when we hear the words “suffragettes” or “suffragists” we conclude that women wanted the vote, wanted the chance to be heard – which, of course, is true. However, I think if we dig deeper into ourselves, even as we are today with the vote being granted to all women over the age of eighteen, we understand the motivation and passion behind all that these women attempted and suffered was about so much more than obtaining the vote.

To me, their fight was about validation, acknowledgement and respect.

The vote was finally granted to women over the age of 30 in February 1918 and then, ten years later, granted to women over 21 giving them equal standing with men. When we look back, it is almost unfathomable that women were not given a voice when so many of them worked in service, retail and factories all over the country. Were they not affected as much by financial, welfare and domestic decisions as men?

It is not hard to imagine the conversations that occurred between women all over the world about the injustice of having to work and raise children, to obey and service families with a budget deemed acceptable by fathers and husbands. How could the government not anticipate that women would eventually rise up? Would revolt?

After all, they were sending a clear message to women – You Do Not Matter.

Hence the battle that spanned decades bringing women together to form a solid, unshakeable, force that would not be silenced without victory.

The suffragists were the peaceful campaigners, relying on rallies and appeals, letters to MPs and people of influence. Then emerged the suffragettes, frustrated, angry and filled with determination. These women concluded only militant action would ensure they were heard. That it was only with drastic action that the press would provide space for them in their newspaper pages.

I have wanted to write a novel with women’s suffrage as the backdrop for many years but couldn’t seem to find the heroine whose story I wanted to tell. At least, I didn’t until I began to write the first book in my Pennington’s Department Store series, A Shop Girl In Bath.

It wasn’t very far into writing the first draft that a secondary character emerged, and I knew I had found the woman to tell my ‘suffrage story’. Esther Stanbury was raised by a mother who had been active in the fight since Esther was a young girl. When her mother died, Esther pushed forward with the Cause…much to her father’s disappointment.

Banished from her home and sent to live in Bath with her aunt, Esther’s passion and determination as a suffragist did not falter. In A Shop Girl Gets The Vote, Esther grows and changes, eventually being faced with the dilemma of whether to join the suffragettes as her frustrations only grow more profound.

I loved writing this book and I loved writing Esther with all her beliefs, virtues and flaws. A Shop Girl Gets The Vote is most definitely a book of my heart and I hope readers feel that as they turn the pages.

Thank you for sharing that with us, Rachel. A fascinating topic that is still important to women today.

A Shop Girl Gets The Vote is the second book in the Pennington’s Department Store series and describes one woman’s journey to find herself and help secure the vote. It is perfect for the fans of the TV series Mr Selfridge and The Paradise. You can buy a copy here, and it is currently only 99p on Kindle.

The other three books in the Pennington’s series are also available here.

Rachel lives with her husband and their two daughters in a small town near Bath, England. She is the author of over 20 published novels including the Pennington’s department store series (Aria Fiction) and the Templeton Cove Stories (Harlequin).

Her next project is a Victorian trilogy set in a Bath brothel which she recently signed with Aria Fiction. The series will feature three heroines determined to change their lives and those of other women. The first book, A Widow’s Vow is due for release in September and available for Amazon preorder now.

Rachel is a member of the Romantic Novelists Association and has thousands of social media followers all over the world.