Two women, a world apart. A secret waiting to be discovered…

VE Day 1945: As victory bells ring out across the country, war bride Ellie Burgess’ happiness is overshadowed by grief. Her charismatic Newfoundlander husband Thomas is still missing in action.

Until a letter arrives explaining Thomas is back at home on the other side of the Atlantic recovering from his injuries.

Travelling to a distant country to live with a man she barely knows is the bravest thing Ellie has ever had to do. But nothing can prepare her for the harsh realities of her new home…

September 11th 2001: Sophie Parry is on a plane to New York on the most tragic day in the city’s history. While the world watches the news in horror, Sophie’s flight is rerouted to a tiny town in Newfoundland and she is forced to seek refuge with her estranged aunt Ellie.

Determined to discover what it was that forced her family apart all those years ago, newfound secrets may change her life forever…

Today is publication day for this marvellous sounding book by Adrienne Chin, and to celebrate I am delighted to be hosting a guest post by the author which tells us more about the setting for her new book.

Off the northern coast of the rugged island of Newfoundland, in the cold waters of the North Atlantic, a magical island named Fogo sits at one of the four corners of the world. Just outside of the outport village of Fogo, you’ll find Brimstone Head, a jutting climb up prehistoric rock from the top of which you’ll look out to a horizon, at the end of which you’ll fall off – according to the Flat Earth Society. Brimstone Head isn’t signposted – you’ll find it at the edge of the town, on the other side of the local football field. It’s just one of the many odd and magical places you’ll find all around Newfoundland and its outlying islands like Fogo.

My second novel, The English Wife, is a timeslip story set in World War II Norwich and contemporary Newfoundland. I’m a native Newfoundlander, although I’ve been in the UK for thirty years, and I had always wanted to set one of my novels in this ruggedly beautiful place. I spent a month in the spring of 2019, travelling around the island, visiting relatives and researching inspiration for the fictional outport village of Tippy’s Tickle. Which is what brought me to Fogo, a short ferry ride from Twillingate on “The Rock” (as the locals call the island of Newfoundland).

Off the ferry, I headed across the island to the fishing outport of Tilting where I stayed in a old sea captain’s house overlooking the small harbour. Irish settlers arrived in the 1730s, building houses and fishing rooms around the harbour to support the fishery.  It has a rare collection of traditional structures, and the oldest Irish cemetery outside of Ireland, and this contributed to it being designated a Registered Heritage District in 2003.

Down the road, just outside of Joe Batt’s Arm, you’ll find the Fogo Island Inn, a stunning piece of modern architect inspired by the fishing huts (called “stages”) on stilts all around the Newfoundland coast. Run as a social enterprise by the Shorefast Foundation, founded by local businesswoman Zita Cobb, I made sure to have lunch there while I was on the island. With a view out to the North Atlantic, with humpback whales spouting and icebergs drifting by, it was a lunch to remember. Oh, and if you’d like to hear how Joe Batt’s Arm got its name, here you go: https://www.youtube.com/watch?v=hAVG7IoO6C8 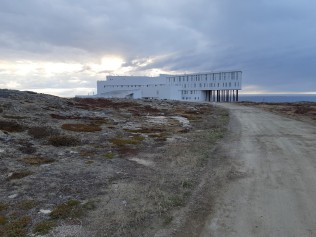 A short walk past the old cemetery in Tilting and along the coast, I came upon one of the four small artists’ residences dotted in remote spots around the island – another venture of the Shorefast Foundation. What a place to write a novel, with a view over the crashing waves, nothing but Greenland far beyond the horizon!

Thank you for that quick tour around the setting for your new book, Adrienne, I can’t wait to read it.

if you like the sound of The English Wife, it is out today and you can buy a copy here. Adrienne Chinn was born in an old paper-making town in Newfoundland, and grew up in rural Quebec and Montreal. She retraced her English father’s footsteps back to England, where she now lives and works as a novelist, design lecturer and interior designer. She is a regular interior design lecturer in the UK and China.

When not writing or designing, Adrienne can be found puttering in her Sussex garden, trawling the Marrakech flea market, or in the queue at Gatwick heading off somewhere new.