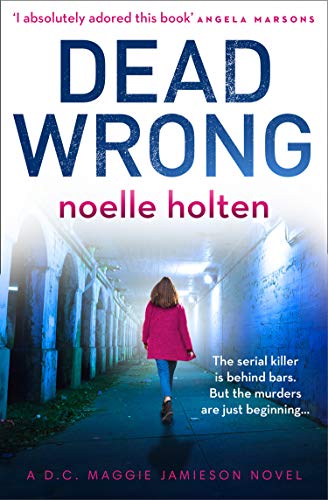 They were abducted years ago. Notorious serial killer Bill Raven admitted to killing them and was sentenced to life.

But now one of them has been found, dismembered and dumped in a bin bag in town.

Forensics reveal that she died just two days ago, when Raven was behind bars, so Maggie has a second killer to find.

Because even if the other missing women are still alive, one thing’s for certain: they don’t have long left to live…

I really loved Noelle’s debut novel, Dead Inside, last year so I am delighted to be taking part in the blog tour today for the second book in the Maggie Jamieson series, Dead Wrong. My thanks to Sarah Hardy of Books On The Bright Side Publicity for inviting me on to the tour and to the publisher for my digital copy of the book, which I have reviewed honestly and impartially.

Which part of the intriguing blurb for this book would not make you want to pick this book up? A series of murders that has been solved by a confession from the killer, but then body parts of the alleged victims start turning up years later, revealing they’ve only just been killed, AFTER the killer is behind bars? Sign me up!

Maggie is now back with her original squad, after her secondment to the Domestic Violence unit in book one, and she is immediately thrust under the spotlight because she was responsible for putting the original killer away in what now looks like a miscarriage of justice. What an amazing preface for ramping up the tension for the protagonist and making the investigation personal for Maggie from the off. It also raises all kinds of queries as to whether she is being suitably dispassionate about the new investigation or is making bad decisions based on saving her own reputation. It is a clever idea and really well executed.

The accused serial killer, Bill Raven, is a great nemesis for Maggie in this novel. Aside from being an alleged murderer, he is just s deeply unpleasant man, smug and antagonistic, and we, the reader, loathe him from the beginning, regardless of whether he actually committed the crimes or not, which puts us firmly in Maggie’s corner even when she is making unwise decisions. The pace of the book is frenetic, we race through it to find out what is going on in this baffling case and can’t wait to get to the conclusion but when we go OMG! What is happening? You can’t leave it like that! I need Book 3 now, I tell you!

One of the main strengths of Noelle’s books, which is clearly present here, is the way she shows the involvement in an investigation of many different people from different specialisations within criminal justice to bring a case to a conclusion. Too many crime novels have murders being solved start to finish by one or two individuals, with everybody else a faceless sidetone. This is obviously not the way things work and, the fact Noelle has worked in this world and understands the importance of everyone in the process, not just the lead officers, shines through and gives the story a real ring of authenticity, even though it is clearly a piece of entertaining fiction.

A great, pacy and gripping crime thriller that will keep you hooked from beginning to end. Can’t wait for the next one.

Dead Wrong is out now and you can buy a copy here.

Please do follow the rest of the fantastic blogs taking part in the tour as detailed below:

Noelle Holten is an award-winning blogger at www.crimebookjunkie.co.uk. She is the PR & Social Media Manager for Bookouture, a leading digital publisher in the UK, and was a regular reviewer on the Two Crime Writers and a Microphone podcast. Noelle worked as a Senior Probation Officer for eighteen years, covering a variety of cases including those involving serious domestic abuse. She has three Hons BA’s – Philosophy, Sociology (Crime & Deviance) and Community Justice – and a Masters in Criminology. Noelle’s hobbies include reading, attending as many book festivals as she can afford and sharing the booklove via her blog.
Dead Inside is her debut novel with One More Chapter/Harper Collins UK and the start of a new series featuring DC Maggie Jamieson.