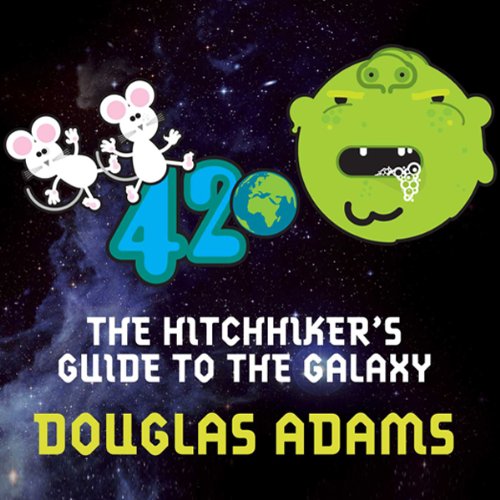 It’s an ordinary Thursday lunchtime for Arthur Dent until his house gets demolished. The Earth follows shortly afterwards to make way for a new hyperspace express route, and his best friend has just announced that he’s an alien. At this moment, they’re hurtling through space with nothing but their towels and an innocuous-looking book inscribed, in large friendly letters, with the words: DON’T PANIC.

The weekend has only just begun . . .

Is there anyone who needs me to tell them why I would want to take Douglas Adam’s The Hitchhiker’s Guide to the Galaxy, a trilogy in five parts (Yes, I’m having all five books, I’ve got them in a version that is just one volume so it totally isn’t cheating) to my desert island with me? Presumably only someone who has never read it, because noone who has ever picked up these books could fail to fall in love with them.

Look, I know that science fiction isn’t a genre that appeals to everyone; indeed, I myself am not a huge reader of sci-fi, but these books are so, so much more than a simple sci-fi series. They are hilarious and clever and astute and a damning commentary on the ridiculousness of human beings and the futility of existence and a celebration of those very same things. There has never, in my opinion, been anything quite like it before or since and the phenomenal popularity of the series (they’ve been translated into more than 30 languages) bears witness to this. They were a no brainer as an addition to my Desert Island books.

The basic story follows the adventures of Arthur Dent, a rather boring man who is whisked away from Earth by his best friend, Ford Prefect,  moments before our planet is demolished by the Vogon constructor fleet to make way for a hyper-space bypass. It turns out Ford is not an out-of-work actor, as Arthur believed, but an alien from the plant Betelguise who is a field researcher for a kind of inter-planetary Lonely Planet handbook called The Hitchhiker’s Guide to the Galaxy. Arthur then accompanies Ford around the Universe, discovering all kinds of extraordinary things.

This sounds far from extraordinary, but the summary does not do justice to the wit and sharpness with which Adams imbues the text and the deft comedy and piercing observations that pepper the book. True fans absorb the comedic prose into their very beings and you will often find in-jokes from the books creeping in to all kinds of discussions and debates. A bunch of EU law experts were referencing the book (and in particular, the virtues, or lack thereof, of Vogon poetry) during a Twitter debate about Brexit last autumn and it made my soul sing. In fact, one of the category headings of my blog is a direct nod to the title of the third book in the series; this is how deeply the novel is woven in to my psyche.

I have recently inducted my fourteen-year-old daughter in to the joys of the book and was delighted to hear her laughing out loud during the same audio version I have just listened to. I must have been around the same age when I first discovered it, and I have been in love with the books ever since, and I will never get tired of them. They make me laugh, and their comedy fills me with joy. They are the perfect eternal companion on my desert island.

The audio version (of the reading of the book, not the original radio shows) is very well done. Stephen Fry is always a delight to listen to, although he is forever associated in my mind with Harry Potter now when I listen to him. I have only made it through the first audiobook so far, but I have The Restaurant at the End of the Universe ready to go and plan to get through them all again this year. These books make my heart happy, what more can I say?

The Hitchhiker’s Guide to the Galaxy is out now in all formats and you can buy a copy here. 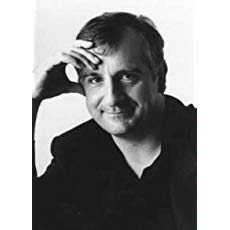 Douglas Adams created all the various and contradictory manifestations of The Hitchhiker’s Guide to the Galaxy: radio, novels, TV, computer game, stage adaptations, comic book and bath towel. He lectured and broadcast around the world and was a patron of the Dian Fossey Gorilla Fund and Save the Rhino International. Douglas Adams was born in Cambridge, UK and lived with his wife and daughter in Islington, London, before moving to Santa Barbara, California, where he died suddenly in 2001. After Douglas died the movie of Hitchhiker moved out of development hell into the clear uplands of production, using much of Douglas’ original script and ideas. Douglas shares the writing credit for the movie with Karey Kirkpatrick.

9 thoughts on “Desert Island Books: The Hitchhiker’s Guide to the Galaxy by Douglas Adams; Narrated by Stephen Fry”