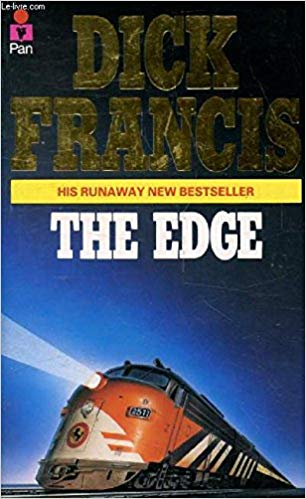 Tor Kelsey, an undercover agent for the Jockey Club’s security service is involved in the attempt to rid racing of one of its most notorious villains, Julius Apollo Filmer. The court however, does not go along with their beliefs, but Tor knows that to let Julius even suspect the service are still on his tail would mean certain death for a number of witnesses.

Meanwhile, several racehorse owners have planned a luxurious train trip across Canada, with race meetings fixed for every major city. Julius Apollo Filmer and Tor are on the passenger list. The beautiful journey through the Rockies gets uglier by the minute and Tor finds himself pushed to dangerous limits to defeat Filmer’s wily scheming.

I can’t remember exactly when I read my very first Dick Francis novel, but I know it was some time early in my horse-mad, teenage years. I know that it was lent to me by my friend, Mary, and that the first one I read was one of his books featuring racing detective, Sid Halley. I also know I was hooked from that very first book and quickly raced through his back catalogue. I then waited eagerly each September for his latest book to come out and bought every new one in hardback. He wrote 44 thrillers before his death in 2010, the later ones with his son, Felix, as co-author. Since his death, Felix has continued to write racing thrillers under the Francis name, and I have continued to buy them.

I have huge nostalgic affection for these books, as Dick Francis was one of the first authors I discovered for myself, without the books being parentally approved, and he was an author that was just my own. No one else in my family was particularly a fan, I didn’t have to share the books with my sisters (who never took care of my books properly- remember the Freya North book you left in Australia, Catherine? Remember the book you dropped in the bath, Rebecca?), these were just mine.

Do you want to see my Dick Francis shelf? Of course you do, here it is:-

Anyway, of all of these excellent books, The Edge is my standout favourite. I must have read it at least a dozen times over the years. In fact I could probably recite it off by heart by now, but I never get bored of it and it was a no brainer as one of my Desert Island Books.

The blurb of this book singularly fails to do the plot justice, so I will try and explain to you what exactly is so marvellous about it, even to people who are not remotely interested in horses or racing.

Although Dick Francis is dubbed the king of the racing thriller, his books are about so much more than horse racing. His plots have involved stories centring around reporters, photography, gold mines, movie-making, wine experts, air taxis, art fraud, diamond dealers, authors, medical experiments, hurricane-chasing and toy making, amongst many other subjects, all of them meticulously researched. To say that he writes racing thrillers does not do his imagination justice, and The Edge is one of the best examples of this diversity in his writing.

The book follows Jockey Club investigator, Tor Kelsey, a man who works undercover investigating racing crimes. When the Jockey Club believes the biggest villain in racing might be plotting a major sting, Tor is sent on the trip of a lifetime across Canada to try and discover and foil his plans.

So far, so ordinary. However, there are things about the book that make it a cut above the average thriller. Firstly, it has the topsy-turvy plot device of the reader knowing who the villain is from the off, but both the investigator, and the reader, not knowing what crime he is planning and having to find this out together. Secondly, the action is set mostly on a glamorous train travelling coast-to-coast across Canada with the elite of the racing world, plus their horses, aboard. There is also a murder mystery being acted out on board for the entertainment of the passengers, so there is fun in trying to work out which parts are the real mystery and which are part of the entertainment. There is also a love interest sub-plot for added spice. A huge cast of great characters, descriptions of a great train journey visiting some of the amazing sights of Canada, and a gripping mystery plot which delivers continual twists and turns and highs and lows – what’s not to love?

This book has a special place in my heart. It has also inspired one of my top Bucket List destinations which I blogged about here (picture below might give you a clue!). Having read it again, I am also struck by how well the book has stood the test of time, despite it being 30 years old and not featuring cell phones, the internet or other modern equipment. There are not many crime books that I can read over and over and still enjoy, despite knowing whodunnit, but all of Dick Francis’s books fall into this category and this is the best of the crop IMHO. Definitely a keeper.

The Edge might be difficult to get your mitts on new now, but try your local library or you should be able to track down a copy in some format here. Sorry, there is no way I am lending out my copy, no matter how much you beg!

After wartime service in the RAF, Francis became a full-time jump-jockey, winning over 350 races and becoming champion jockey of the British National Hunt. He came to further prominence in 1956 as jockey to Queen Elizabeth the Queen Mother riding her horse Devon Loch, which fell when close to winning the Grand National. Francis retired from the turf and became a journalist and novelist.

Dick Francis was widely acclaimed as one of the world’s finest thriller writers. His awards include the Crime Writers’ Association’s Cartier Diamond Dagger for his outstanding contribution to the crime genre, and an honorary Doctorate of Humane Letters from Tufts University of Boston. In 1996, Dick Francis was made a Mystery Writers of America Grand Master for a lifetime’s achievement and in 2000 he received a CBE in the Queen’s Birthday Honours list.