I have to confess, I have never been to Asia and this is a great source of consternation to me as a professed travel junkie. And top of my bucket list of locations to visit in Asia is Cambodia, and the top of my dream Cambodian itinerary is a trip to Angkor Wat.

Angkor Wat means ‘Temple City’ or ‘City of Temples’ in Khmer and is a Hindu temple complex 4 miles north of the Cambodian city of Siem Reap and is the largest religious monument in the world. 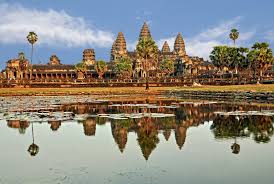 It was built by the Khmer King Suryavarman II in the early 12th century in Yaśodharapura, the capital of the Khmer Empire, as his state temple and eventual mausoleum.

The site is the pride of Cambodia, appearing on its national flag, and has been a UNESCO World Heritage site since 1992.

The temple is celebrated for its bas reliefs and devatas. Over the years, the temple was neglected and large parts of it reclaimed by the jungle until it was extensively restored in the twentieth century, but it was never completely abandoned and has been a continuous religious centre since its construction.

I can never see images of magnificent places like this in remote places that have existed for thousands of years and marvel at the skill and ingenuity and determination it took to construct them in eras that did not have access to the modern technology available today. How were these buildings constructed in such a way that has allowed them to exist through the centuries? The devotion to their faith that compelled people to create these monuments to their gods is something to be marvelled at.

Whether you have a faith or not, a place like this has to be worth a pilgrimage to marvel at what human beings are capable of if they have the will, and I hope to get there myself in the not too distant future.