London, 1940. Emmeline Lake and her best friend, Bunty, are trying to stay cheerful despite the Luftwaffe making life thoroughly annoying for everyone. Emmy dreams of becoming a Lady War Correspondent, and when she spots a job advertisement in the newspaper she seizes her chance – but after a rather unfortunate misunderstanding, she finds herself typing letters for the formidable Henrietta Bird, the renowned agony aunt of Woman’s Friend magazine.

Mrs Bird is very clear: letters containing any form of Unpleasantness must go straight into the bin. Emmy finds herself dismissing problems from lovelorn, grief-stricken and morally conflicted readers in favour of those who fear their ankles are unsightly or have trouble untangling lengths of wool. But soon the thought of desperate women going unanswered becomes too much to bear, and Emmy decides the only thing for it is to secretly write back….

I know, I am SO late to the party with this book. I have had the hardback version sitting on my TBR forever, and I had never got round to reading it for some reason, mainly pressures of all the blog tours I took on last year. I finally gave in and bought the audiobook with one of my monthly credits and, it was obviously fate that had stopped me reading it because I absolutely adored the audio version.

I just have to say from the off that Anna Popplewell does the most amazing job of narrating this book. Any of you who have read it will know that the author captures the patterns and peculiarities of speech from the era perfectly and, hearing this spoken aloud rather than reading it, really brings it to life. I could picture Mrs. Bird so clearly in my mind’s eye through the narration, it gave the novel an extra dimension and I would highly recommend listening to this in audio format. Not every book lends itself equally well to audiobook, and so much of the success depends on the narrator, this one is just beautiful.

Moving on from the format, I fell completely in love with this book. The premise was what drew me to it in the first place, the magical idea of a repressed wartime agony aunt refusing to deal with any Unpleasantness from her readers and a sympathetic young woman who relates only too well to the messes that women found themselves in during wartime. It was a genius way of demonstrating the perils of war in a completely fresh manner with a unique approach and it worked like magic. I have to say, I am not personally a fan of wartime books, I often find them quite traumatic, so the fact I loved this one so much is testament to the skill of the author.

The book is a delightful blend of gentle comedy and pathos. The situation the girls find themselves in is dire, but their friendships and love for those around them bolster them and pull them through, so when that is threatened, it puts their whole world into more peril than the war itself, and this is the real core story of the book. Our personal relationships are the things that hold us solid through the direst of times and anything that threatens those are the things that are truly dangerous. I absolutely adored the approach that the author took to this whole topic, it spoke to me on a really fundamental level and was the main reason that this book got under my skin.

The main character of Emmy was totally relatable as a modern young woman dealing with extraordinary circumstances. Flawed but wonderful, any reader would fall in love with her and be riding the highs and lows of her experience through every page. My twelve-year-old daughter, who listened to portions of this book while we were in the car, was fascinated by the name Bunty (which is ‘not a real name, Mummy’), and kept asking me what had happened during the portions of the book she had missed. Anything which can capture the imagination of a modern tween like this must be something special.

And what to say about the titular Mrs. Bird? Only that the author has created a character so much larger than life that anyone who reads this will never forget her. A Lady Bracknell for a new age.

I loved this book so much that I have given a copy to every one of my friends who hasn’t yet read it, nominated it as my Secret Santa book in my book club swap and gifted the audiobook to my writer buddy. I know it wasn’t published this year, but it is my read of the year for 2019, and I know I will come back to it again and again. Pure joy on the page, as close to reading perfection as you are ever likely to find.

Dear Mrs Bird is out now in all formats and you can buy a copy here. 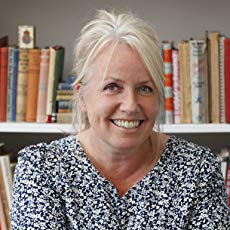 AJ Pearce was born in Hampshire, UK. Her favourite subjects at school were English and History, which now (finally!) seems to be making some sense.

She majored in American History at the University of Sussex, spending her Junior Year at Northwestern University in Illinois, USA.

​She began writing as a hobby in 2005. In 2012 she came across a 1939 copy of a weekly women’s magazine and had the idea of writing a novel set in wartime London.

In 2016, following a seven-publisher auction in the UK, Dear Mrs Bird was acquired by Picador, and in the USA by Scribner after a similarly competitive auction.  Dear Mrs Bird was published in hardback in the UK in April 2018, becoming a Sunday Times Top 10 Bestseller two weeks later. It has been sold for translation in thirteen other countries.

In 2019, Dear Mrs Bird was a Richard and Judy Book Clubpick. It was shortlisted for the Debut of the Year at the 2019 British Book Awards as well as the Royal Society of Literature Sir Christopher Bland Prize, and long listed for the inaugural Comedy Women in Print award.

In July 2019 it was further longlisted for the Goldsborough Books Glass Bell Award, and the Historical Writers’ Association’s Debut Crown 2019 for the best historical debut.

​AJ is currently writing her second novel, the sequel to Dear Mrs Bird.

Connect with A. J. Pearce: