THE PAST WILL NEVER LET YOU GO…

When a four-year-old girl and her father are found dead in the Swedish city of Karlskrona, the police quickly conclude it was a murder-suicide, a tragedy requiring no further investigation.

But Luke Bergmann, a reformed criminal still haunted by his violent past, believes they are wrong. The dead man, Viktor, was his best friend, and Luke knows he would never commit such a horrific crime.

When more bodies turn up, Luke is certain the same killer has struck again. Alone, he embarks on an investigation which reaches back through decades to his friend’s involvement with a sinister cult and dark secrets are exposed as Luke struggles to keep his own long-buried demons hidden away.

And when Luke finds himself in a killer’s sights, his search for the truth becomes the fight of his life.

Can Luke get justice for Viktor and his daughter and prove his best friend was not a murderer, or will the shadows of the past overwhelm him?

Happily taking my turn on the blog tour today for Kult by Stefan Malmstrom. My thanks to Sarah Hardy of Books On The Bright Side Publicity for inviting me to take part and to the author and publisher for my digital copy of the book, which I have reviewed honestly and impartially.

This is a really fascinating, if very dark, read that stood out because it was partially based on the author’s own experiences as a young man with Scientology, which leant the story an extra level of authenticity.

I don’t think I am alone in finding cults a compelling subject. The idea that people can be influenced into believing the most extraordinary things that seem totally bizarre to the rest of us, to the extent that they are prepared to distance themselves from their family and friends, devote their lives and money to the cause and enact the most extreme forms of behaviour, including murder, is a topic I find riveting. I have read quite a lot of non-fiction on the subject of cults, and also enjoy fiction books that have this as a central subject matter. The Girls by Emma Cline was a recent novel based around a cult that was very popular, but the attraction of reading a book about possibly the world’s most famous cult, Scientology, by someone who was actually a member was too good an opportunity to miss and this book did not disappoint in any way.

The book is cleverly constructed with three story threads running through it that start off seemingly separate but are gradually drawn together as we go throughout the book until it forms a complete picture at the denouement. One of the threads follows the story of a group of young people as they are enticed into the world of Scientology in a small town in Sweden in the early 1990s. The main protagonist of the book is, Luke, a not quite whiter-than-white American now living in Sweden, who discovers the apparent murder-suicide of his best friend and his friend’s young daughter. However, Luke refuses to believe that Viktor was capable of any such thing and, despite warnings from the police investigating the matter, is determined to discover the truth for himself. The third thread…well you need to read the book for yourself to find out how that weaves in.

This book is gripping, to say the least. I read it in a day and could not put it down. The construct of the book was extremely effective in keeping the reader turning the pages and trying to work out how the pieces fitted together. The characters were cleverly portrayed to make you either love them or loathe them, as appropriate, and they felt realistic and well-rounded. I thought Luke was a great character to carry the story and would be very keen to read further books featuring him. I have to warn readers that some aspects of this book involved extremely disturbing subject matter that some readers may find distressing, but this was not done in a gratuitous manner and was relevant to the story. I found the insight into Scientology the most fascinating part of the book, though. To gain such a glimpse into the secretive world of Scientology from someone who has been there, and hear first hand the kind of damage it can do, was riveting. The author gives us a note at the end regarding how much of the book is fact and how much is fiction and it was eye-opening to say the least.

This is a dark, gripping and tense thriller with a fascinating back story and I would highly recommend it to anyone who enjoys a bleak but enthralling read.

Kult is out now and you can buy a copy here.

Make sure you check out the other reviews posted by my marvellous fellow bloggers on the tour: 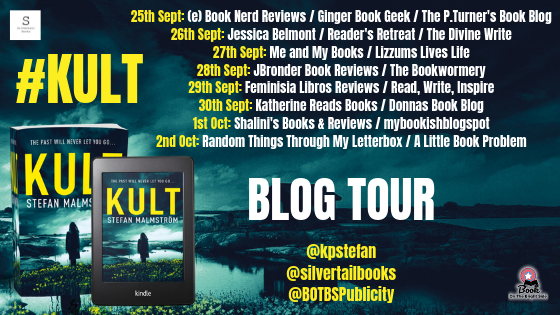 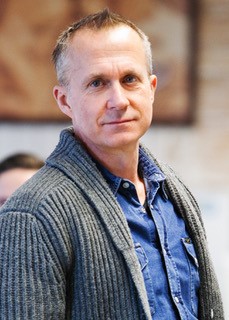 Stefan Malmström is a former news journalist who has worked for Sveriges Radio and Swedish TV4. Today he works as a consultant, lecturer and author. At a young age, Stefan was manipulated into the Church of Scientology in Hässleholm, a small town in southern Sweden. KULT, his first book, is based on his experiences in the cult. Stefan lives in Karlskrona in Sweden with his family.