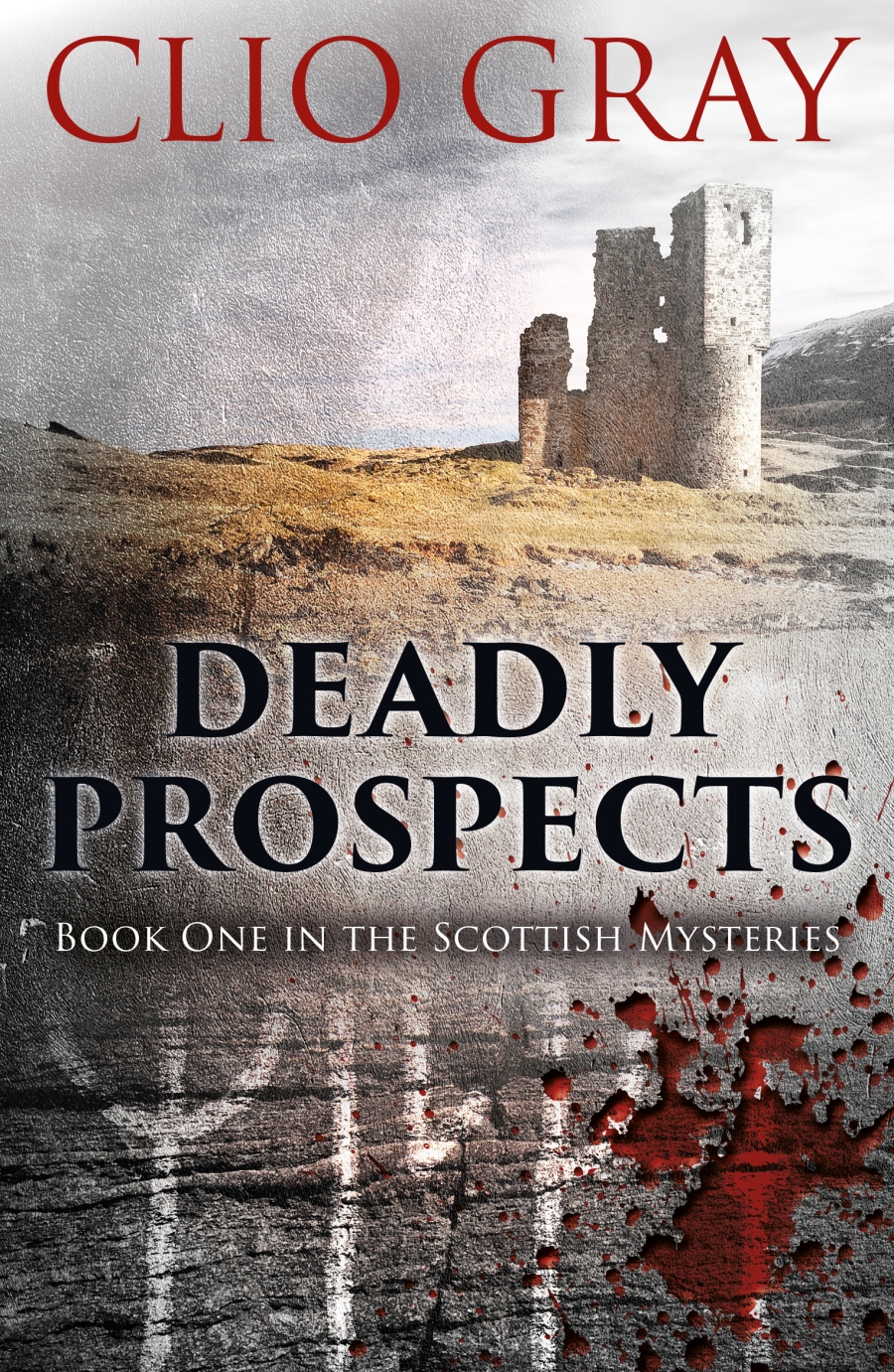 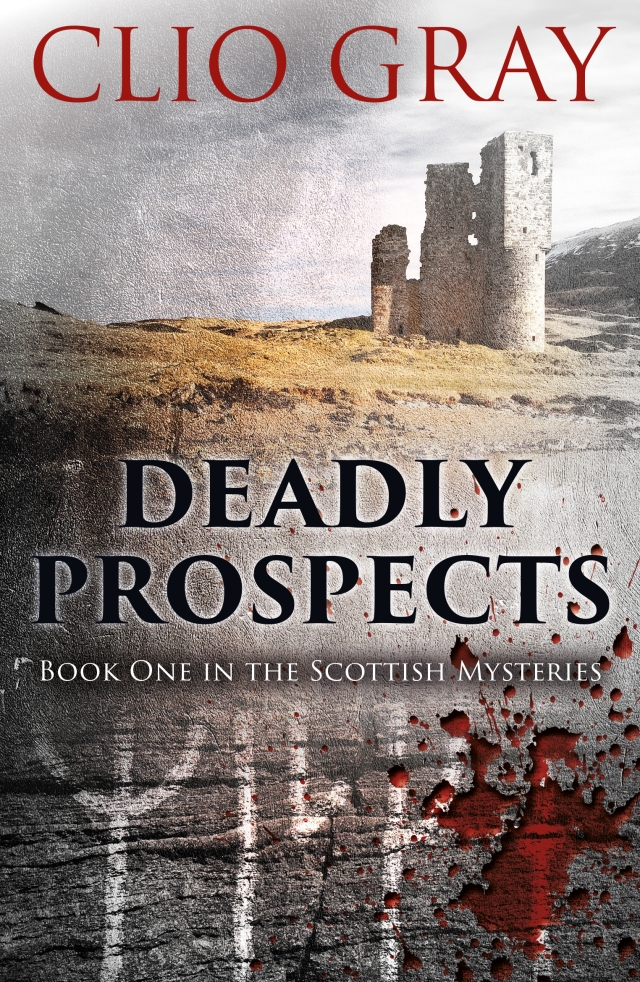 1869, Sutherland, Scotland. For years the people of this remote area of the Highlands have lived a hard life. Now a local Gold Rush has attracted the Pan-European Mining Company to the area, and Solveig McCleery is determined to re-open the Brora mines and give the population the riches they deserve.

But when work starts on re-opening the mines, the body of a prospector is discovered, and odd inscriptions found on stones near the corpse. Before the meaning of these strange marks can be deciphered another body is discovered.

Are these attacks connected to the re-opening of the mines? Will Solveig’s plan succeed in bringing peace and prosperity back to the area? Or has she put in motion something far more sinister?

I am delighted to be taking my turn on the blog blitz for Deadly Prospects by Clio Gray, first book in the Scottish Mysteries series. My thanks to Kelly Lacey at Love Books Group for offering me a place on the tour, and to the publisher for my ecopy of the book, which I have reviewed honestly and impartially.

I found this book very different and refreshing, combining as it did very detailed, historical issues and a gripping mystery. I’m not sure I have read a book that felt quite so like a  fascinating history lesson and an intriguing crime puzzle at the same time.

The author chose a time period and location in which to set the book that I have never come across used in a fictional mystery before, the Highlands of Scotland around the time of the Clearances. I have always been fascinated by Scottish history and the plot really intrigued me, which is why I applied for the blog tour in the first place, but I got far more than I was expecting with this book. The level of historical detail was impressive, I learnt a huge amount about emigration between Scotland and Scandanavia that I had never known before, but it was woven into the book so cleverly that it did not feel like it was detracting from the plot in any way, but only enhancing it.

The book really captured the hardship and bleakness of the period and location, remote as it was, and barren, and the struggles that the people had to try and hang on to their homes and scratch out a living in the face of adversity, both natural and man-made. The characters were well drawn and compelling and I was completely pulled in to the story and held captive while it played out. I found it sinister and disturbing, and I did not see the twists it was going to take coming at all.

The author is clearly passionate about the topic she is writing about and has taken a great deal of time and care in researching this book before writing it. The depth and breadth of the research that has gone into it can only be a labour of love and I think this shines through in the writing. The book affected me more than I expected, and was one of those happy surprises that come along rarely, an un-hyped book that exceeds expectations and takes you places you never saw coming but swept you away. I highly recommend this for lovers of great historical fiction.

Deadly Prospects is available now and you can buy a copy here.

Clio was born in Yorkshire, spent her later childhood in Devon before returning to Yorkshire to go to university. For the last twenty five years she has lived in the Scottish Highlands where she intends to remain. She eschewed the usual route of marriage, mortgage, children, and instead spent her working life in libraries, filling her home with books and sharing that home with dogs. She began writing for personal amusement in the late nineties, then began entering short story competitions, getting short listed and then winning, which led directly to a publication deal with Headline. Her book, The Anatomist’s Dream, was nominated for the Man Booker 2015 and long listed for the Bailey’s Prize in 2016. 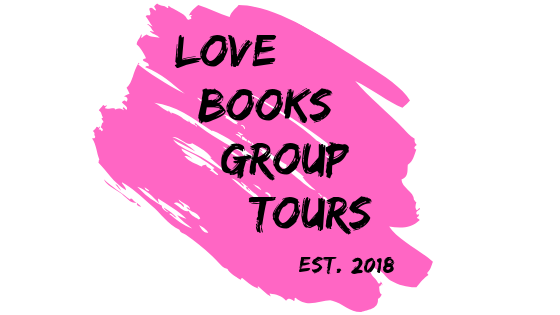 Ariadne by Jennifer Saint is a stunning piece of art, both inside and out.
I finished this blisteringly good read in a single day, and I bet you will too if you pick up The Wild Girls by Phoebe Morgan.
Love the vibrant colour of the Mindful Chef Dragonfruit Smoothie I had for my morning snack. It goes particularly well with the cover of the book I am reviewing today on the blog.
Nice work if you can get it! #sunshine #goodbook #lazyafternoon #amreading #bookstagram #bookblog #bookblogger #bookbloggeruk #booklover #amreading #amreadingcrimefiction #alittlebookproblem
I’m so thrilled with my monthly Orenda subscription parcel received from Bert’s Books today. Not only do I have a beautifully beribboned copy of The Source by Sarah Sultoon with a personal note from Bert about the book, and bookmarks, as usual. This month I also have a letter about the book from the author, which is fabulous, and a tasty snack to eat while reading. This is definitely a subscription any book lover should consider.
If you are wondering what links a shopping trolley, Metallica, a large key, the flag of Romania and the constant quest for 20p pieces, you’ll want to pick up a copy of The Dig Street Festival by Chris Walsh.