It has been far too long since I have written any travel-related posts on the blog and I’ve been meaning to put this one up for a while as it links to one of my Desert Island Books entries from back in February so here we go.

This trip is absolutely top of my bucket list trips and has been for years. I mean, years and years. Since I was in my teens (which was a long, loooong time ago), when I first read The Edge by Dick Francis. It was the plot of this book, set on an exciting transcontinental train journey across Canada, that made me first yen to cross the continent on the rails. (You can read more detail about the book in this post.)

There is something romantic about the idea of travelling by train, isn’t there? It’s not a coincidence that Murder on the Orient Express is Agatha Christie’s most popular novel. Unfortunately, our little island is too small to afford the opportunity for any long, romantic train journeys and our railways leave a lot to be desired but the opportunities abroad are endless. Any seasoned travellers and railway aficionados will be familiar with the names of the most famous – The Eastern & Oriental Express, The Ghan, The Trans-Siberian Express, The Blue Train, The Maharaja’s Express, The California Zephyr, The Glacier Express. A trip on any of them would be a treat.

Unfortunately, my only experience of sleeping on trains was in 1992 during a month spent inter-railing around Europe with my best friend, Lisa. Not glamorous and, at times, scary (we stopped one night at the border between Hungary and Czechslovakia at a point where no station was in sight and watched from the window as several young people were marched off into the darkness by border guards, never to be seen by us again), this was nothing like the alluring train travel featured in novels!

Of all of these trains, The Rocky Mountaineer is the one which has most firmly grabbed my imagination. Picture climbing from the wide, sweeping plains of Canada’s heartland into the majestic, glacier-covered scenery of the Rocky Mountains for a stay in the fabulous hotel at Chateau Lake Louise. This is the part of the trip which first drew me to the idea of doing Canada by rail, but I think going coast to coast by train would be an amazing way to see this vast and diverse country. 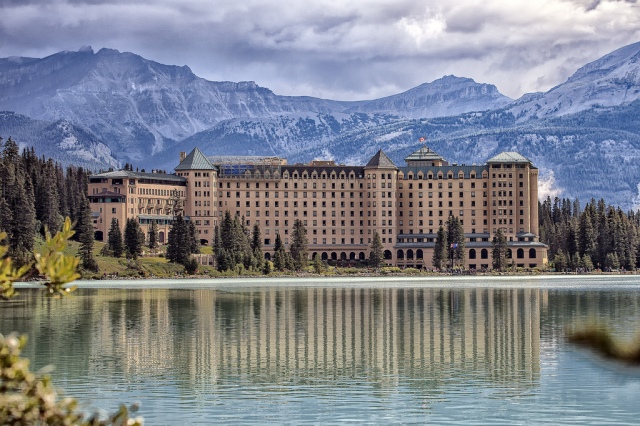 Over the years I have done a lot of road trips in the USA and, whilst I love the freedom of the open road, I think the train would give a different perspective and dimension to a trip. It is putting the itinerary in someone else’s hands and then sitting back to enjoy the ride, after all, on a train, you don’t get to pick the stops! For someone who is always in charge of planning our trips and map-reading, I think this might be quite refreshing. In a car, you are hermetically sealed into your own bubble, cut off from the outside world and other people unless you choose to step outside. On a train, you are part of a community and would have to engage more with people around you, especially on a long journey, which would have a certain novelty. You can relax, take in the scenery, have meals brought to you, be lulled to sleep by the sway of the train and the clatter of the rails beneath you. Be snug in your own little compartment, a tiny, moving hotel, and cover much greater distances in a shorter time.

That is how I imagine it, anyway. However, it seems my children are less enthralled by the idea, so I think this might be one I save until they have flown the nest and the Irishman and I are pleasing ourselves. But one day, I will make this trip. Until then, I have this poster on the wall at home to fuel my daydreams.