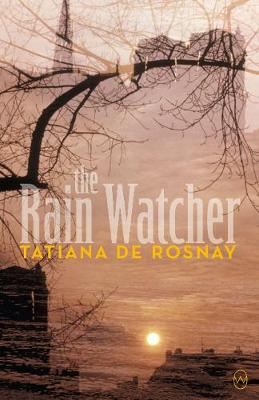 It is raining non-stop over Paris.

The Malegarde family – split between France, London, and the US – is reunited for the first time in years. When Paul, a famous yet withdrawn arborist, suffers a stroke in the middle of his 70th birthday celebrations, his son Linden is stuck in a city that is undergoing a stunning natural disaster.

As the Seine bursts its banks and floods the streets, the family will have to fight to keep their unity as hidden fears and secrets also begin to rise.

In this profound and intense novel of love and redemption, De Rosnay demonstrates her wealth of skills both as an incredible storyteller and also as a connoisseur of the human soul.

I’m thrilled to be taking part today in the blog tour for The Rain Watcher by Tatiana de Rosnay. My thanks to Julia Forster for inviting me to take part in the tour and to the publisher for my copy of the book which I have reviewed honestly and impartially.

I warn you now that I am going to wax lyrical about this book because this has been a very special read for me, although I realise this book is not going to be to everyone’s tastes, as it is a book about human relationships first and foremost, told tenderly and luxuriously, so for those that like a fast-paced book, it is not going to be your cup of tea. However, if you are looking for something different that will reward you endlessly with wave after wave of emotion, look no further.

The book follows the Malegarde family as they reunite in Paris after a four-year separation to celebrate the seventieth birthday of the patriarch, Paul. With him are his wife, Lauren and his daughter, Tilia and son, Linden. Although on the surface, the family appear close and cordial, over the course of the book the disconnect between them all becomes obvious and the secrets they are all keeping from one another are slowly revealed.

This is a book about communication, and how a lack of it, a lack of honesty between us and those we love, prevents us from having the true depth of understanding and connection that will bring us closer and enriches our lives. How our fears of judgment and rejection by our family prevent us from revealing parts of ourselves which, whilst forming a fundamental part of who we are, we fear may be something that courts their disfavour or disappointment. but to avoid that risk, not only do we lose the potential for closeness and understanding that can enrich our lives, but we possible do them a disservice and deny ourselves years of joy and support we could otherwise have had. And no one is perfect.

The characters in this book are drawn beautifully, with real love and truth and I raced through it, despite the slow pace of the actual plot, because I wanted desperately to find out all I could about them and how their stories were going to end. I feared the foreshadowing I saw of potentially sad events to come, so gripped was I by the dramas of this family, and was moved beyond words by how the story unfolded. I read this book over the course of one day, unable to put it down, which goes to prove you don’t need explosions and car chases and duplicity and twists to make a compelling novel, just beautiful and truthful writing done exceptionally well.

The story is set against the back drop of catastrophic flooding in Paris, and the descriptions of the devastation and hardship were compelling and eye-opening, and an interesting story in their own right. The parallels the author was trying to draw between this and the upheaval going on in the Malegarde family were rather lost on me and didn’t really add to the story, but did not take from it either, so I would not highlight this as a negative in the book. This is obviously a love letter and a lament for a city that the author loves, and I think this came through in the writing.

This is a beautiful, moving, poetic and lyrical story of one family and its struggle for closeness and authenticity. I absolutely loved it, it will haunt me for a while now I know and I will pick it up again. I cannot recommend it highly enough. A true gem.

The Rain Watcher is out now and you can buy a copy here.

To get some alternative viewpoints of the book, please do read the reviews by the other wonderful bloggers on the tour, as detailed on the poster below: 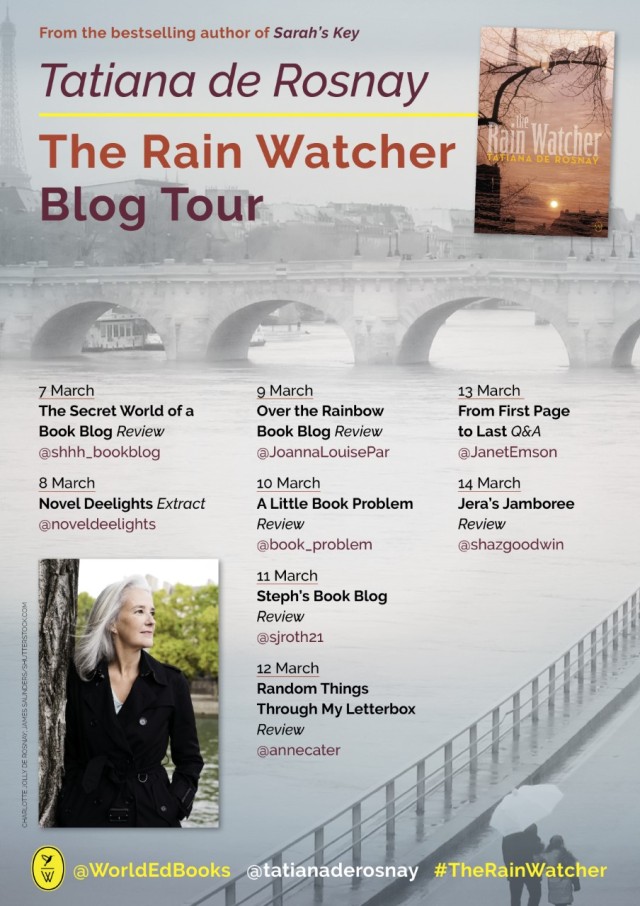 Tatiana de Rosnay, of English, French, and Russian descent, was born in 1961, in Neuilly-sur-Seine, and raised in Boston and Paris. After studying literature in England at the University of East Anglia, Tatiana worked in Paris as a reporter for Vanity Fair, Psychologies Magazine, and ELLE. She has published twelve novels in French and three in English including New York Times bestseller Sarah’s Key, which sold over eleven million copies worldwide, and was made into a film starring Kristin Scott Thomas in 2010. Her books have been published in 42 countries and in 2011 she was listed by Le Figaro as the fifth most-read French author worldwide.
Connect with Tatiana:
Website: http://www.tatianaderosnay.com
Facebook: Tatiana de Rosnay
Twitter: @tatianaderosnay
Instagram: @tatianaderosnay
Pinterest: tatianaderosnay