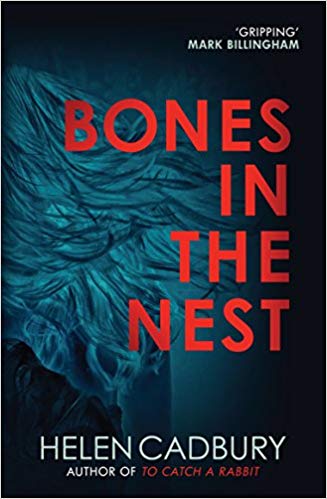 The Chasebridge Killer is out; racial tension is rising and the mutilated body of a young Muslim man is found in the stairwell of a tower block in Doncaster. As he gets drawn into the case, Sean Denton’s family life and his police job become dangerously entwined. Meanwhile a young woman is trying to piece her life back together, but someone is out there; someone who will never let her forget what she’s done.

This is the second book I have chosen in the 2019 Reading Challenge for my online book club, The Fiction Cafe Book Club.  You can find details of what the challenge entails in this post. The second category is ‘A book set in the town in which you were born,‘ which in my case is Doncaster in South Yorkshire.

This is the second of the Sean Denton books I have read. I read the first, To Catch A Rabbit, which won a couple of awards, last year and enjoyed it and, in my opinion, this one is even better.

Sean Denton has now graduated from Police Community Support Officer to full police constable now, which gives him, and consequently the reader, a more central role in the investigation this time around. This investigation also centres around racial tensions, whether a person deserves a second chance after committing a horrendous crime, and a possible honour killing, so the topics are very current and relevant, even though this book is now a couple of years old. The author has also continued the aspects I really enjoyed from the first book, namely Sean’s family, work and romantic relationships, and the inclusion of these give him a real humanity which allows the reader to get close to him and become invested in his journey.

It is novel and interesting to have a very rooky investigator at the centre of a book of this nature, and there are certain aspects of his junior position that provide interesting plot points in the story, as he has to assert himself and find his place when manipulated by the hierarchy. He is a very warm, honest and likeable character that you can’t help but want to succeed. He also has certain disadvantages and divided loyalties to overcome – there is a lot going on in the book.

Although not a Doncaster native, the author did live in York and obviously knows and likes the Yorkshire folk and has a great grasp of the region. Although the main setting of the book, the Chasebridge estate, is fictional, there are a lot of allusions to real life areas of Doncaster and the town is depicted fairly and accurately but warmly and kindly in the book. I felt well disposed towards the author and her depiction of my birthplace having read it, despite it being rife with crime!

This book was a great read, pacy and entertaining with an enjoyable, gripping plot and interesting characters. I am looking forward to reading the third book in the series and think it is a great shame that we have lost an author who was clearly talented.

You can get a copy of Bones in the Nest by Helen Cadbury, here, along with the first book in the Sean Denton series, To Catch A Rabbit and book three, published posthumously, Race To The Kill.

Helen Cadbury was a British crime fiction author, poet and playwright, whose debut novel, To Catch a Rabbit, won the Northern Crime Award, was an Amazon Rising Star, and was chosen as one of the Yorkshire Post’s top novels, since the millennium, to reflect the region. It introduces Sean Denton, a young Police Community Support Officer, uncovering the murky truth behind the death of a trafficked young woman and the disappearance of a local man.

Her second novel, Bones in the Nest, follows Sean Denton back to the Chasebridge Estate, where racial tensions are rising and the notorious Chasebridge Killer has just been released from prison.

Before writing fiction Helen was an actor and teacher, including spending five years teaching in prisons. Sadly, Helen died in 2017 aged 52 after a battle with breast cancer.