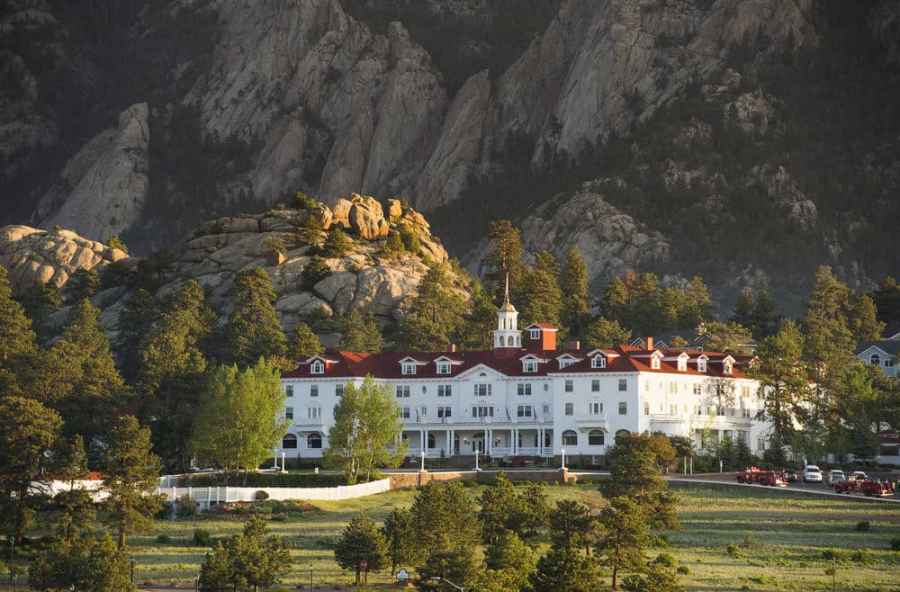 My second bucket list entry may again seem like an odd choice, but I think I have been inspired by the approach of Halloween and the fact I am currently reading a book set in another creepy hotel. Bucket List Entry #2 is The Stanley Hotel in Estes Park, Colorado. The hotel, with 142 rooms, opened in 1909 and has been popular ever since as it stands only five miles from the entrance to the Rocky Mountain National Park and has beautiful views over Lake Estes and the Rocky Mountains. It is on the National Register of Historic Places.

That all sounds very lovely, Julie, I hear you say, but what is so special about this hotel to make it worth flying thousands of miles to see? Well, I am sure most you will already know – it is because this hotel was the inspiration for The Overlook Hotel in one of the most famous books by one of my favourite authors, The Shining by Stephen King.

Any Stephen King fans are probably already familiar with the story behind the inspiration for The Shining. In the autumn of 1974, Stephen and his wife, Tabby spent one night at The Stanley Hotel. The hotel was just about to close down for the winter and, on check-in, King and his wife found they were the only guests and had this huge hotel to themselves. They wandered the long, echoing empty corridors and ate dinner alone in the vast dining room, where all the other tables had the chairs put up on them. Their dinner was accompanied by recorded orchestral music. That night, King had a dream in which his three-year-old son was running through the corridors of the hotel screaming. He was being chased by a fire hose. The dream woke him with a jerk, in a sweat, and he sat in a chair looking out at the Rockies and smoking. “By the time the cigarette was done,” King says, “I had the bones of the book firmly set in my mind.”

The Shining was published in 1977 and was a huge success, being made into a film by Stanley Kubrick in 1980. Room 217, the room occupied by King that night, features heavily in the book and is now the most requested room at the hotel.

So, The Stanley Hotel has become a place of pilgrimage for Stephen King fans, as well as standing in a US State that I have yet to visit and is high on my bucket list. Then, earlier this year something else happened at The Stanley which made me want to visit even more. To see what that was, check out the video below:

Imagine being in a place where you have wildlife that close to the doorstep! The opportunity to possibly see wildlife so up close and personal adds even more to the lure of the area. I’m not sure I can sell ghosts and black bears to my other half as appealing holiday attractions so this one may need a little more work, but I’ll get there one day!

Is there any destination that has inspired a novel that you would like to visit? I’d love to hear your literary destination bucket lists.

For more details about The Stanley Hotel, please check out the hotel website.