So, this is my first entry in my new Bucket List blog category, and I’m going off piste for the first one. It’s Fallingwater in rural Pennsylvania.

Perhaps not the most obvious choice for my inaugural entry but I’m not adding these in any particular order and I have just been reading a fabulous book on the background of this house, Frank Lloyd Wright’s Fallingwater: The House and its History, so it is at the forefront of my mind.

Fallingwater is a house designed by architect Frank Lloyd Wright as a weekend retreat for Edgar J. Kaufmann, owner of Kaufmann’s Department Store in Pittsburgh, and his wife, Lilane. It was built partly over the waterfall at Bear Run, in a isolated area of western Pennsylvania and is considered the finest example of Wright’s ‘organic architecture’, which promotes harmony between human habitation and the natural surroundings in which they sit.

The house was constructed between 1936 and 1938 and used as a rural escape by the Kauffman’s until 1963 when they donated it to Western Pennsylvania Conservancy. It was designated a National Historic Landmark in 1966. In 2007 it was voted the best all-time work of American architecture by the American Institute of Architects. In has been open to the public since 1964, and since then has been visited by more than 5 million people, despite its remote location.

Frank Lloyd Wright designed another one of my favourite buildings, the Solomon R. Guggenheim Museum on Fifth Avenue in New York, which I know you will all recognise. 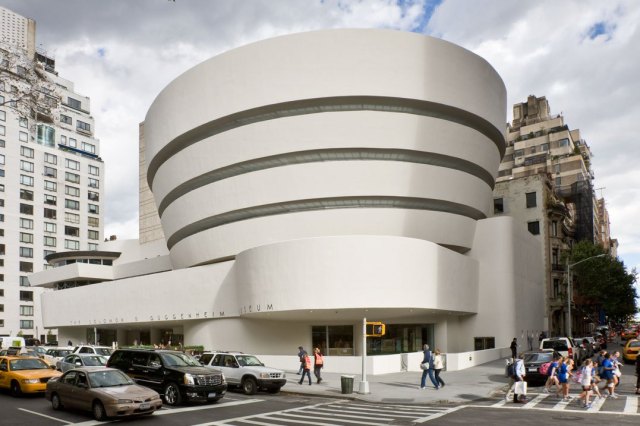 Aside from being aesthetically striking, the interior layout of this building, which curves around like the inside of a snail’s shell makes for a stunning and exciting way to view the art as you take a lift to the top floor and follow the curved slope down through the inside of the building. A fine example of the design of a building enhancing the experience of the people using it.

A lot of people seem surprised when I tell them I am interested in architecture but, if you have ever been anywhere to admire a specific building – the Pyramids at Giza, the Colosseum, Westminster Abbey, the Empire State Building – then you are interested in architecture too. The many magnificent, adventurous and imaginative ways that people have invented to put up buildings over the centuries astounds me.

I’ve visited Pittsburgh before, on a whirlwind work tour, but never made it out to Fallingwater. One day, I’d love to have the opportunity to go and see this ambitious house, so modern in design but that sits so quietly in its rural setting, and take a tour for myself.

What is your favourite piece of architecture and have you ever visited it in the flesh? Have you been to Fallingwater? I’d love to hear your thoughts.