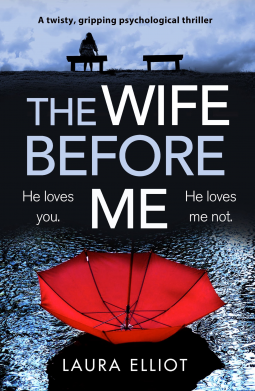 “One evening as the sun is setting, Amelia Madison’s car slides into the sea off Mason’s Pier. Her body is never found.

Two years later, Elena Langdon meets Nicholas Madison. She is grieving the loss of her mother, he is grieving for his wife. Together they can help each other.

Now Elena is living with Nicholas. But Elena doesn’t really know him. She doesn’t know what he is capable of.

And she doesn’t know what really happened to Amelia.

Until the day she discovers the torn page of a letter and the words she reads chill her to the bone.

Elena must find the person who wrote these letters if she is to save herself.”

This is a real rollercoaster of a ride told by the voices of two women involved with the same man. Elena meets Nicholas at her mother’s funeral when she is grieving and vulnerable and falls in love with him. Over a time, a darker side of his personality is revealed and Elena begins to wonder what really happened to Nicholas’s first wife, Amelia, who disappeared four years previously.

The second voice in the book is that of Amelia, and the truth about her relationship is slowly revealed over time. Only as Elena discovers what really happened to Amelia can she find a way to save herself.

There is also a mysterious third voice in the narrative that adds a shocking twist to the story.

This book grabs you in an emotional vice from the first page and doesn’t let go until the heart-stopping last page. I was so involved in the story that I forgot where I was and raced through the book, desperate to know what happened next but afraid to turn the page because parts of it were so emotionally horrifying that I almost could not bear to look.

The characters is this book are deeply polarising. Some you will be frantically rooting for, some you will despise with every ounce of your being (Yvonne, urgh). They are cleverly drawn so that you can’t help but be drawn in and involved in their stories. you will be despairing of it ever turning out right, conflicted about some of the characters and frantic to get to the end, what more can you ask for from a psychological thriller?

Some parts of the book are shocking and hard to read and no doubt will be triggering for people who have suffered domestic abuse. The book takes a slightly surreal turn towards the end and I was not at expecting what happened, which is the aim of the writer but I suspect some people may possibly take issue with one of the plot devices involved. For me, it worked really well and I was left feeling shaken and shivery but satisfied. Any book that moves you in this way is a read to be recommended. This is a great addition to the genre.

The Wife Before Me is out today and you can buy a copy here.

My thanks to NetGalley and Bookouture for my copy of the book which I have reviewed honestly and impartially.

Laura Elliot has written six novels which have been widely translated. Under the pseudonym June Considine, she has written twelve books for children and young adults. She has also worked as a journalist and magazine editor.

She is a full-time writer, living in Dublin, Ireland, where she lives with her husband, Sean. After serving on the Board of the Irish Writers Centre, she established WORD, a group that connects professional writers. She is also one of the founder members of the Freedom to Write Campaign, which advocates on behalf of imprisoned writers around the world.