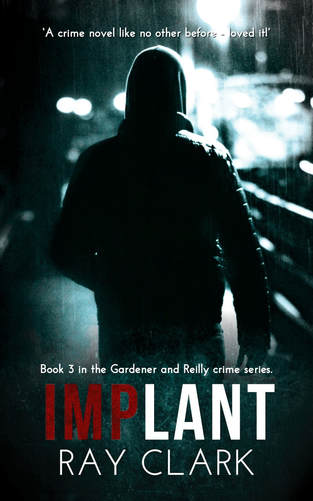 “Bramfield, near Leeds, a sleepy little market town nestled on the borders of West and North Yorkshire. Detectives Stewart Gardener and Sean Reilly discover the naked corpse of Alex Wilson, nailed to the wall of a cellar in his uncle’s hardware store. His lips are sewn together and his body bears only one mark, a fresh scar near his abdomen.

Within forty-eight hours, their investigation results in dead ends, more victims, no suspects and very little in the way of solid evidence. Gardener and Reilly have a problem and a question on their hands: are the residents of Bramfield prepared for one of history’s most sadistic killers, The Tooth Fairy?”

I am on the blog tour today for Implant by Ray Clark and my thanks go to Kelly from Love Books Group for my invitation to take part and to Urbane Publications for my copy of the book which I have reviewed honestly and impartially.

This is the third book in the Gardener and Reilly series and I must admit I have not read the first two but this was not a problem as the book works perfectly as a standalone although I am sure that it would have been interesting to know more of the recurring characters’ back stories if I had read the first two before starting this one.

The blurb makes the book sound very gruesome and I went in to it with some trepidation but actually, although the murders are disturbing and unpleasant, I found the book started out with quite a light, easy to read and informal tone which is unusual in a book of this type but something I really enjoyed. It is quite hard to describe what I mean but the writing felt conversational and friendly and it made it very easy to warm to the characters and the community quickly and become invested in the story. I like to think that this is because the author is from Yorkshire and lives not very far from me and the book is set in a village outside Leeds in a community similar to my own, and everyone knows what warm, friendly and likeable people we Yorkshire folk are!

The chapters in this book are very short which I like in books of this type, as it keeps the pace moving fast and makes it easy to read and are based around the time that events are happening in the investigation which made it easy to keep up with the development of the case. We are introduced to a lot of characters very quickly in the first few chapters and I had to concentrate to begin with to keep who was who straight in my head, especially as I started reading it late at night when I was tired, but once I had them sorted out, the writing flowed very smoothly and I was quickly engrossed. The characters are complete, rounded, real people with their own quirks and personalities which added nicely to the story without detracting from it, I thought they were very well written. There is a sense of humour running through the interactions between the police officers which I thought was probably a good reflection of how people react to cope with some of the awful things they see.

The crimes themselves were fiendish and complicated and the police don’t seem to have much to go on so the investigation is a real puzzle that is fascinating to follow and watch unfold. The murderer is very clever and, although I had worked out who had done it by the end, their motivations were intriguing and I felt the whole thing flowed well and was wrapped up in a satisfying way by the conclusion of the book. I think the author has been very inventive in his plotting – I am always envious of how crime writers’ minds work!

All in all, this is an accomplished and satisfying novel that will pay dividends to any crime fan who picks it up and I would definitely recommend it and will be going back to pick up the first two books in the series.

Implant is out now and you can buy a copy here. The first two books in the Gardener and Reilly series are Impurity and Imperfection.

Don’t forget to follow the tour for other opinions on the book:

The British Fantasy Society published Ray Clark’s first work in 1995 – Manitou Man: The World of Graham Masterton, was nominated for both the World and British Fantasy Awards. In 2009, Ray’s short story, Promises To Keep, made the final shortlist for the best short story award from The Tom Howard Foundation. Ray is based in Goole, and has set his Gardener and Reilly crime series in nearby Leeds.