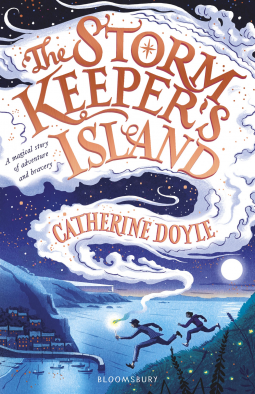 “When Fionn Boyle sets foot on Arranmore Island, it begins to stir beneath his feet.

Once in a generation, the island chooses a new Storm Keeper – someone to wield its power and keep its magic safe from enemies. The time has finally come for Fionn’s grandfather, a secretive and eccentric old man, to step down. Soon, a new Keeper will rise.

Fionn’s ancestral home has been waiting for him. But deep underground, someone else has been waiting, too. As a battle rages, over who will become the island’s next champion, a more sinister magic is waking up, intent on rekindling an ancient war.”

This book is a mystical story of ancient magic and family legacies, brought right up to date with modern story-telling. Fionn Boyle goes to visit his grandfather on the island of Arranmore, a place his mother doesn’t talk about and where tragedy has befallen his family. Once there, Fionn discovers he is descended from an ancient line of families integral to the history of the island, which is full of magic and with an ancient evil lurking beneath the earth. Fionn doesn’t think he is anything special, or that he has what it takes to live up to his legacy, but he may not have a choice.

As someone who has always loved traditional myths and folklore, I would have loved this book as a child and still found plenty to enchant me in adulthood. The setting was perfect – an isolated storm-swept island full of history and legend, magic and secrets – just the kind of place to capture the imagination of any child. Fionn is an easy hero to relate to as well, as he seems ordinary in the beginning, possessing no special skills and riddled with fear and self-doubt, and with a fractious relationship with his older sister. I am sure most children will recognise aspects of themselves in Fionn and be able to identify with him and his journey.

The relationship Fionn has with his grandfather is particularly touching and emotional and was at the heart of the story for me. The idea of seeing ourselves in previous generations and how we can carry down the best aspects of our family through the generation and maintain those links is charming and heart-warming. The relationship he has with his sister is also drawn very naturally and authentically. Their bickering, the way she annoys him and how frustrated he gets with her were very true to life and extremely entertaining. The suitably appalling boyfriend who is a rival to Fionn’s place in island history was also good fun to read.

There was plenty of action and great ideas in this book. The way the Storm Keeper was able to capture moments in time and preserve them to be revisited in future was a great hook for creating some exciting moments of drama in the book, and it was pacy enough to carry the reader along through chapter after chapter.

If I had a minor niggle about this book, it was that it was obviously setting itself up for a sequel and the ending was not perhaps satisfying enough in relation to the subject of the evil lurking beneath the earth which does not fully materialise. There are a lot of hints and developments that are obviously leading to a major battle occurring in a future book that we will have to wait for, so this definitely feels like a prequel. This did not stop it being an enjoyable read but I was most certainly left wondering about what is going to happen to Fionn and the island next.

A small quirk I also came across was with the name of the main character – Fionn – which my eye, unfamiliar with this name, kept reading as Fiona and I had to mentally check myself each time I read it which was a niggling annoyance but that might just be me!

Those tiny issues aside, this is a great book that is a welcome addition to the strong canon of middle grade literature that has sprung up over the past few years and I am sure any child who loves stories of magic and adventure will quickly get lost in this book over the long summer holiday. I would definitely encourage my younger daughter and nieces and nephews to read it and I will be waiting eagerly for the next instalment in Fionn’s story.

The Storm Keeper’s Island is out now and you can buy a copy here.

My thanks to Bloomsbury and to NetGalley for my copy of this book which I have reviewed honestly and impartially.

Catherine Doyle grew up beside the Atlantic Ocean in the west of Ireland. Her love of reading began with great Irish myths and legends, and fostered in her an ambition to one day write her own. She holds a first class BA in Psychology and a first class MA in Publishing from the National University of Ireland, Galway, and is the author of the YA Blood for Blood trilogy. The Storm Keeper’s Island is her debut middle-grade novel and was inspired by her real-life ancestral home of Arranmore Island, where her grandparents grew up, and the adventures of her many seafaring ancestors. After living in Dublin City for two years, Catherine is now based in Galway but spends a lot of her time in London and the US.