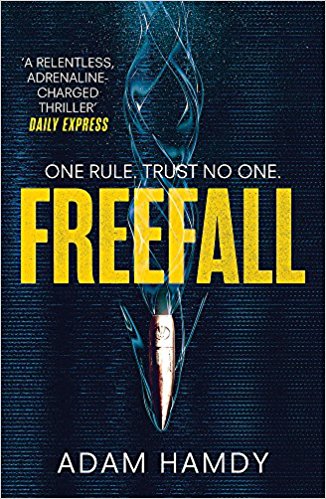 “JOHN WALLACE IS A TARGET
Hiding off-grid after exposing the shadowy Pendulum conspiracy, Wallace is horrified to discover he is still marked for death.

THERE ARE ONLY TWO PEOPLE HE CAN TRUST
DI Patrick Bailey is still reeling from the murder investigation that nearly cost him his life.
FBI Agent Christine Ash is hunting a serial killer with a link to an unfinished case

HE MUST FIND THE TRUTH
The death of a London journalist triggers an investigation that brings them back together, hurling them into the path of an unknown enemy.

BEFORE THE KILLER FINDS HIM
Hunted across the world, they are plunged into a nightmare deadlier than they could have ever imagined.”

Today is my stop on the blog tour for Freefall, a new thriller by Adam Hamdy. My thanks  to Anne Cater at Random Things Tours for inviting me to take part.

Before I start on my review I have to hold my hands up and state that, when I volunteered to read and review this book, I had not realised it was the second in a projected trilogy and I have not read the first book, Pendulum. I know that often books can be read as standalone but, having read Freefall, I believe it is essential to read the first book to get the most out of this one.

The book opens eight months after the conclusion of the first book with the graphically-described suicide of a journalist. This aftermath of this incident, which appears not to be a straightforward suicide after all, is attended by Bailey, a police officer who was involved in the action in book one. The action then jumps around from chapter to chapter between this investigation, scenes taking place in the USA involving an FBI agent who is investigating a series of gruesome decapitations using a vicious tool and events in Afghanistan where the hero from book one has gone to hide out and try and come to terms with the events of the first book, which involve the mysterious Pendulum.

I have to say I was confused, which is entirely my own fault for not having read book one first. There are lots of references back to the events of the first book and the thoughts and actions of the three main characters here are obviously deeply influenced by what happened to them previously. They have developed relationships with each other, and all have stories that I can tell have been well-established in the previous volume and not having this information I am sure took a lot away from the reading experience of this one.

That having been said, there is a lot to enjoy and commend in this book. Hamdy also writes screenplays and his eye for the visual is very apparent from the beginning. Each scene reads like a movie in your head, his descriptions are so vivid they jump off the page and I enjoyed his writing style very much. The dialogue flows naturally and the characters seem complex and very well developed – hence my frustration in not having all the back story from the previous book – as it is obvious that they have all been deeply affected by what happened previously and are struggling with it in their own ways. A lot of thrillers eschew emotional depth in favour of all action but this is not the case here, Hamdy manages to provide both in equal measure.

The action takes place across the globe. I was particularly enamoured of the descriptions of the Hindu Kush and the conflict taking place in the remote areas of Afghanistan. I love any book that really takes me to a place and a situation I have never been using the full five senses and Hamdy certainly manages to do this effectively.

The action in the book is unrelenting from page one and keeps up the pace to the end. It is definitely a page turner. I would say it is not for the sensitive or squeamish. Hamdy does not hold back on the imagery and, as previously pointed out, his descriptions make these images jump off the page and slap you in the face. In the first few chapters we have suicide, attempted beheadings and IED explosions, all described in unrelenting prose so potential readers should bear this in mind. If you are a fan of this kind of ballsy thriller, you will love it.

In conclusion, this is a gripping and thought-provoking thriller that is a gut above some that I have read with its focus on emotional as well as physical action but make sure you read Pendulum first if you want to avoid floundering like I did.

Freefall is out now and you can buy a copy here.. The first book in the Pendulum trilogy, Pendulum is available here.

Identified as an Amazon Rising Star, British author and screenwriter Adam Hamdy works with studios and production companies on both sides of the Atlantic.

He is the author of the Pendulum trilogy, an epic series of conspiracy thriller novels. James Patterson described Pendulum as ‘one of the best thrillers of the year’, and the novel was a finalist for the Glass Bell Award for contemporary fiction. Pendulum was chosen as book of the month by Goldsboro Books and was selected for BBC Radio 2 Book Club.

Prior to embarking on his writing career, Adam was a strategy consultant and advised global businesses in the medical systems, robotics, technology and financial services sectors.