Today I’m delighted to bring you my stop on the Mini Blitz Retro Review Blog Tour for Audrey Davis’ book A Clean Sweep. Thank you to Rachel at Rachel’s Random Resources for inviting me to take part. 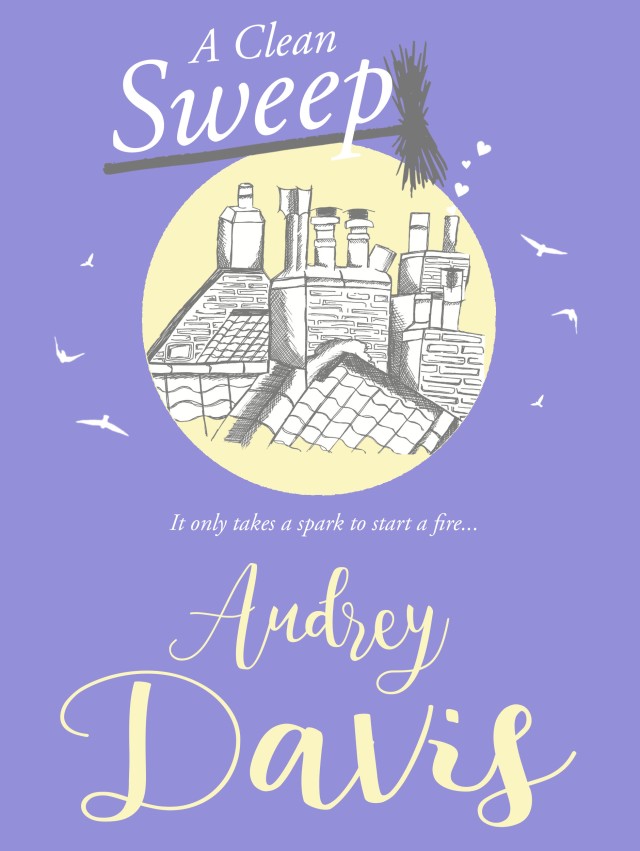 “A CLEAN SWEEP is a laugh-out-loud tale of love, lies and second chances.
Love comes around when you least expect it. Fifty-something widow Emily isn’t expecting romance. Nor is she expecting a hunky twenty-something chimney sweep on her doorstep.
Daughter Tabitha knows something isn’t quite right with her relationship, while her boss – Abba-loving Meryl – thinks she’s found the real deal. Are they both right, or pursuing Mr Wrong?
Emily’s sister, Celeste, has the perfect marriage … or does she? Can a fitness tracker lead her down the path to happiness or heartbreak?
Susan is single, overweight and resigned to a life of loneliness. There was the one who got away but you don’t get another try, do you?
Prepare for a rollercoaster ride of emotions in a book that will grab your heart, make you smile and wish you had a chimney to sweep.”

Chimney sweeps, are they even a thing any more? I’ve lived in this house for thirteen years and I’ve never had my chimney swept. I may have to remedy that situation now that I’ve read this book as it can obviously lead to interesting encounters!

This is the story of a group of women – ordinary women with ordinary lives – and the not-very-extraordinary things that happen to them. Doesn’t sound very exciting, does it? Well, do you know what, there is drama and passion and tension and heartbreak and joy in the not-very-extraordinary lives of these women and the genius of this book is making a funny, page-turning and heart-warming story out of the ordinary things that happen to ordinary people like you and I.

Emily is a middle-aged woman, widowed from a mundane marriage and just happy trundling along day to day, not expecting much until a chance encounter with hunky Joe who comes to sweep her chimney (not a euphemism to begin with but it soon turns into one, and this book is full of them!) turns her life on its head. There is an instant attraction, but is the substantial age gap a stumbling block to a proper relationship?

“He is a twenty-something hunk who wouldn’t look twice at someone old enough to be his mother. Cougars, wasn’t that what they were called these days? Except Emily felt she was about as predatory as an ancient feline who craved nothing more than a saucer of milk and a good ear scratch.”

Emily’s daughter Tabitha has problems of her own. Stuck in a job she doesn’t want and a relationship that could best be described as ‘tepid’, her life is not at all what she imagined. Does she have the courage to make drastic decisions to change it all? And what will she say when she finds out about her mum’s toy boy?

“One old crone – who really should only have been let out at Halloween – had spent almost half an hour slathering “try me” samples of organically produced hand creams on her wizened claws. Then complained that the smells were ‘quite obnoxious’. As she scuttled off back to her broomstick, Tabitha resisted shouting after her that six different fragrances mixed together didn’t necessarily make for olfactory heaven. Maybe eye of newt and tongue of bat would have been more up her street. Up yours, Endora.”

Tabitha’s boss, Meryl, is searching for love online and thinks she may finally have found it in charming suitor, Miroslaw. But can you really know someone you meet online?

Emily’s sister, Celeste, is married to the love of her life, Martin. But ghosts from Martin’s past are threatening to upset the stability of Celeste’s seemingly charmed life, and she only has herself to blame.

Lonely Susan is battling life’s problems solo. When faced with the biggest challenge of her life, she wonders if things would have been different if she hadn’t thrown away her one chance at love twenty years ago. But there is no point is wishing she had made a different decision now, is there?

This book is set in an ordinary town that could be anywhere, it is not relying on a picturesque or exotic location for colour. These are women that you know, that you meet in every day life, that could be you. The things that happen to them are the things that happen to all of us, every day, everywhere. There are no shocking twists or outlandish escapades. The drama is the small drama that happens to all of us all of the time. The kind of thing that isn’t going to make ripples for anyone else in the wider world, it isn’t going to make the front page of the paper but that can change an individual’s life forever in an instant. The author very cleverly makes us care about the characters in this book so much that these ordinary things become as important to us as they are to the individuals involved and you become very invested in a positive outcome very quickly. Honestly, I was so impressed by how she has managed to draw such a poignant story out of things that, on the face of it, seem fairly undramatic.

This book is carried along by the author’s warm and engaging voice and the strong vein of humour that runs through the book. I was laughing out loud one minute and then my heart was breaking for one of the characters the next. I completely bought in to everything that was happening and really wanted everything to turn out well for them all. I read this book in one sitting, and the time just flew by. It is utterly charming and I would highly recommend it. It is refreshing to see such a fantastic story made out of ordinary lives, featuring real people. I loved it.

A Clean Sweep is available now and you can buy a copy here. 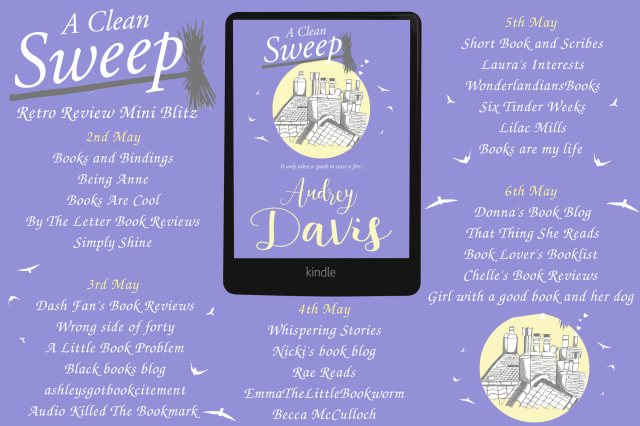 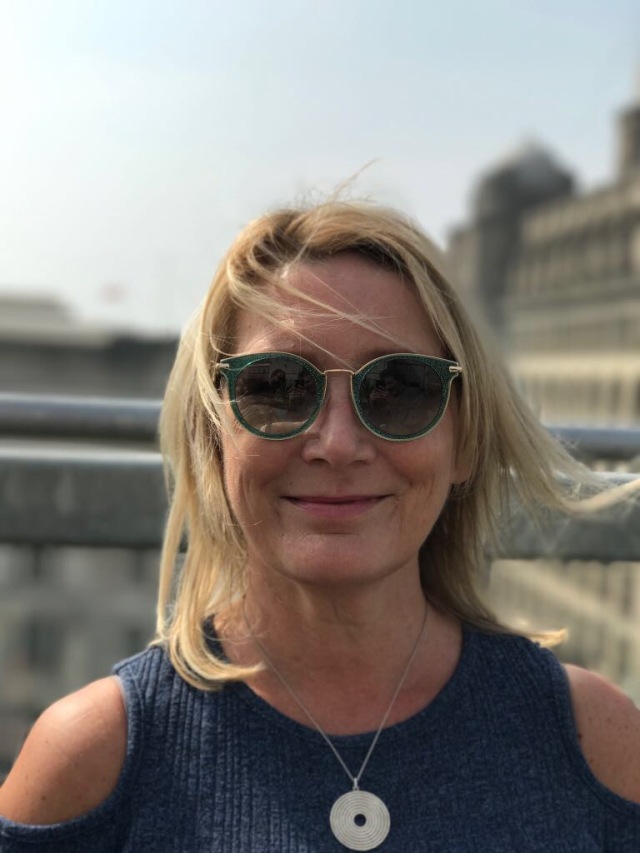 Audrey Davis survived secondary school on the West coast of Scotland. Rubbish at science but not too bad at English, she originally wanted to be an actress but was persuaded that journalism was a safer option. Probably wise. She studied at Napier College in Edinburgh, the only place in Scotland at that time to offer a journalism course.
Her first foray into the hard-nosed newspaper world was as a junior reporter in Dumfriesshire. Duties included interviewing farmers about the prize-winning heifers to reporting on family tragedies. She persuaded her editor to let her launch an entertainment column which meant meeting the odd celebrity – or just the downright odd. From there, she moved to the loftier rank of senior reporter back in her home patch. Slightly more money, less farm animals but a higher crime rate. As Taggart would say: ‘There’s been a murrrrder!’
After a stint in London on a video magazine – yes, she is that old – Audrey moved to Singapore with her fiancé. She tried valiantly to embrace the stinking heat, humidity and lack of jobs, although she did work briefly on a magazine which was banned by the government for ‘artistic’ use of naked men’s bottoms.
Next on her adventures was a land Down Under where her main focus was raising Cost Centre One (aka firstborn) and coming to terms with the imminent arrival of Number Two. Still, she loved the Aussie way of life – BBQs, beaches and bring your own booze to restaurants – so it came as a blow when OH announced a move back to the UK. Not a job between them, the climate a possible deal breaker and an Exorcist-style vomiting infant on the flight home didn’t bode well …
Always a survivor, Audrey sought out similar-minded friends (i.e. slightly bonkers), got the children into a good school and thought about taking up writing again. Sadly, thinking about it was as far as she got, unless you count shopping lists. Then, hubby drops another bombshell. Switzerland. As in – it’s packing time again. Off to the land of cheese, chocolate, scarily efficient trains and a couple of teeny, tiny issues. Like driving on the ‘wrong’ side of the road and speaking a foreign language (French). The former was conquered fairly quickly (we’ll skip over the wall demolition in week two), the latter remains an ongoing battle of the hopeful against the hopeless. At least she provides amusement for the local workforce.

It wasn’t until 2016 that Audrey rediscovered her writing mojo with an online Writing Fiction course. From there, her first novel – A Clean Sweep – was born, although it took a bit longer than nine months from conception. A short, darker prequel – A Clean Break – followed, and in November 2017 she published the first in a novella trilogy, The Haunting of Hattie Hastings Part One. Part Two is published on 21 March 2018, with the conclusion following in May/June. After which she might have a wee lie down …