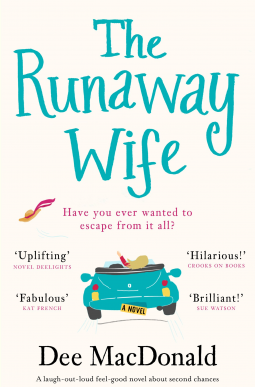 “One evening in early August, while mashing the potatoes for dinner, Connie McColl decides she’s had enough…

Connie McColl is tired of solving one family crisis after another – usually involving her unruly grandchildren – while her husband Roger spends all day at his beloved golf course. Surely it must be time for her to shake off her apron and start living again?

So Connie packs a bag, gets in her little green car and drives off…

On her journey from England to Scotland, Connie stops in on long-lost friends and makes all sorts of colourful new companions along the way. As Connie has the time of her life, sleeping under the stars and skinny dipping in the sea, she finally begins to rediscover herself. And she starts to wonder, will she ever be ready to return home?

Or will this summer change her life forever?”

It was the front cover that initially drew me to request this book. Its cartoon-like illustration made me think I was going to get a light, humorous and uplifting read that wouldn’t be too taxing and it definitely lived up to those expectations, but it was oh so much more on top.

I fell in love with Connie immediately. Any woman who has run a family (and let’s face it, that’s most of us) for any length of time are going to recognise aspects of themselves in Connie. Completely taken for granted by her neglectful husband, Roger and three grown up children, she finally snaps and takes off in her battered old car heading for who knows where in search of respite and excitement – who hasn’t dreamed of doing that from time to time? (Go on, admit it, the thought has crossed your mind!) You have to admire Connie for having the guts to do it and we are rooting for her from the start.

With no plan in mind, Connie goes where the whim takes her and, by a series of fortuitous accidents plus as a result of her warm and approachable nature, she makes some great new friends along the way, has some mild adventures and generally enjoys herself. Seeing her discovering herself as a individual along her journey and watching her blossom is heart-warming and you can’t help but privately cheer her on.

Meanwhile, back at home, her self-absorbed husband and spoilt children start to realise how much Connie has done for them in the past and how lost they are without her. However, they are still more concerned about the inconvenience to themselves that how she must have been feeling and this just made me feel even happier that Connie had left the selfish bunch behind and was finally having some fun. Consequently, whatever naughtiness Connie gets up to on her trip (and there is some, she is a feisty woman), you can’t possibly blame her, given what she has put up with over the years!

The one aspect of this book I was not expecting, and where I totally under-estimated it, was the real depth and poignancy that the storyline took on towards the end. This novel deals with some really serious issues in a way that was very unexpected from the cover. I don’t want to include any spoilers in the review so I can’t really say too much but I can say that the author has managed to weave these into an otherwise humorous story very deftly and it did not feel at all unbalanced or off kilter. I was really surprised and impressed with the subtlety of how this was done and, in my opinion, it took the book to a level I was not expecting when I started it.

Connie, of course, finally returns home – a new woman and ready to confront the issues she has with her husband and family. I thought I knew where this was going but, just when I was complacently settled in for my predicted ending, the author blew me out of the water again with a twist I did not see coming at all.

This book is a delight. It is really refreshing to see a book with a main character over the age of 40 and I enjoyed every minute of it. Pick it up, I promise you it delivers more than you might expect.

The Runaway Wife is out now and you can buy a copy here.

Thank you to Bookouture and NetGalley for my copy of this book which I have reviewed honestly and impartially. 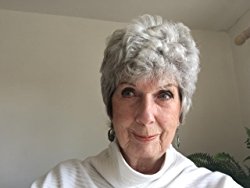 The Runaway Wife is Dee’s first (published) novel but in fact she wrote her very first book – at around seven years of age! This was a love story which she duly illustrated before sewing all the pages together up one side. Writing was what she ‘was good at’ in school and she won several essay competitions, but then life got in the way and she didn’t pick up a pen again until after retirement.

Dee left Scotland and headed for London at the beginning of the swinging sixties. After typing her way round the West End she became an air stewardess on long haul routes with BA (then BOAC) for eight years. After that she did market research at Heathrow for both the government statistics and for BA, she became a sales rep., and was the receptionist at the Thames Television Studios in Teddington when they had the franchise.

She then ran a small B&B for ten years in Cornwall, where she lives with her husband. Dee has one son and two grandsons who live locally.