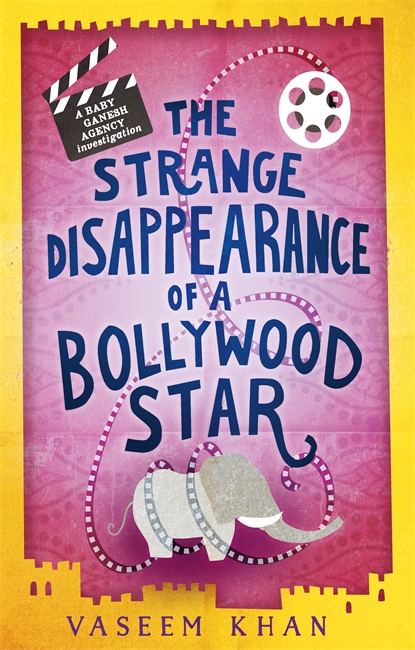 But even in the city of dreams, there is no guarantee of a happy ending.

Rising star and incorrigible playboy Vikram Verma has disappeared, leaving his latest film in jeopardy. Hired by Verma’s formidable mother to find him, Inspector Chopra and his sidekick, baby elephant Ganesha, embark on a journey deep into the world’s most flamboyant movie industry.

As they uncover feuding stars, failed investments and death threats, it seems that many people have a motive for wanting Verma out of the picture.

And yet, as Chopra has long suspected, in Bollywood the truth is often stranger than fiction…”

This is the third book in the Baby Ganesh Agency series by Vaseem Khan, but the first one I have read (I’d like to say it’s because I’m a maverick, but really it’s just because of my self-imposed book-buying moratorium and the fact that I was given this as a birthday gift!). It doesn’t appear to matter that I am reading them out of sequence, this book functions perfectly as a standalone novel, but I will definitely be going back to read the first two.

The central character of the novel is Inspector Chopra, a retired police officer-turned-private detective in Mumbai and the plot follows him as he tries to unravel the mystery of the kidnapping of a famous but wayward Bollywood actor. He is helped, and sometimes amusingly hindered, in his efforts by a colourful cast of supporting characters, including his cute little elephant sidekick, Ganesha, about whom there is more than a whiff of the supernatural – he appears to have attributes not bestowed on your average baby elephant.

This book is a light-hearted detective story, along the lines of Alistair McCall Smith’s No.1 Ladies’ Detective Agency series or the Agatha Raisin books by M.C. Beaton and I believe fans of those series would enjoy Vaseem Khan’s work. The main kidnapping plot is fun and frenzied, with enough twists and turns to keep the grey matter occupied, but the main joys of the book are the characters and the fabulous, exotic setting of Mumbai. The author truly does a wonderful job of bringing all the life and flavour of Mumbai alive in this book, and anyone who likes their stories set in an far-flung location, that is really captured as if it were an additional character in the tale, will not be disappointed.

Inspector Chopra is a character who is very easy to warm to, which is important for the central protagonist in a book of this nature – we need to be rooting for the hero. He is honest, unassuming, moral but very pragmatic and a with a healthy dose of impatience for his old colleagues in the police force and their rules and regulations when they get in the way of his pursuing the case – I really liked that about him. His wife, Poppy, I think perhaps was my favourite character. Not the subservient Indian housewife in a supporting role that you might expect to find, but an independent and feisty woman who is a true partner and support to Chopra, a woman after my own heart. I love writers who include strong and equal female characters in their work.

There is a lovely sub-plot in the book involving flamboyant eunuchs, a long-buried secret and Chopra’s ex-policeman colleague in a ‘fish-out-of-water’ situation that had me grinning from ear to ear. Fantastic fun.

This is a sweet, easy and amusing read with characters you will love, and imbued throughout with all the spice and spectacle of India. If you are looking for a book to warm your cockles and cheer you up, you couldn’t do much better.

The Strange Disappearance of a Bollywood Star is out now and you can buy it here.

Vaseem Khan first saw an elephant lumbering down the middle of the road in 1997 when he arrived in India to work as a management consultant. It was the most unusual thing he had ever encountered and served as the inspiration behind his series of crime novels.

He returned to the UK in 2006 and now works at University College London for the Department of Security and Crime Science where he is astonished on a daily basis by the way modern science is being employed to tackle crime. Elephants are third on his list of passions, first and second being great literature and cricket, not always in that order.

I’ve just finished this fantastic book and I’m revelling in that satiated stupor you only get from a fully immersive and transportive reading experience. Definitely will be in my top ten books of the year, I absolutely loved every aspect of this novel.
After sorting out ponies, the kids eating their own weight in Easter eggs, cooking a big roast lunch for the seven of us and clearing up, now it’s time for a cup of tea, a bit of Easter chocolate for me and to finish this excellent book. Happy Easter all!
It’s the end of one month and the beginning of a new one, which means it is time for another of my Desert Island Children’s Books and in March I re-read Ballet Shoes by Noel Streatfeild.
Do you ever have books that you just can’t make your mind up about?
Where did the ☀️go? ☹️
Jabbed and happy!